The Marshmallow Shoes: A Brief Review 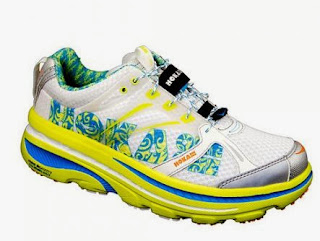 A couple of months ago I shelled out for a pair of Hoka One One's. Having done well with the lightweight low-drop approach up until now, I was skeptical about this Giant Shoe. But my post-op ankle wanted something just a little more sturdy as I started to run again, without the weight and added tech of the typical "stability" shoe. The Bondi Speed 2 fit the bill. Surprisingly lightweight but a stiffer sole, with just a slight rocker bottom.

I've taken them on treadmill, road, and trail so far, and they've been stable on all terrain, although they're made to be a road shoe. There's definitely a cushion-y feel that I'm not used to in my old standby, the saucony kinvara. My feet run narrow, and there's plenty of extra room in these - they would probably work well for someone with a wider foot. The extra room gives my foot plenty of space to spread out, preserving that "natural" running feel despite the platform and cushion. As touted by the ultrarunners who seem to love the Hokas, it's easy to hammer the downhills with these shoes without your quads feeling like they went through a meatgrinder. The locklaces that they come with are decent, although I'll probably end up replacing them - I have to pull them far enough out that the loop bounces around a bit too much for my liking.

So, the marshmallow shoes have earned a permanent place in my shoe rotation, despite the fact that I'm convinced I look like bigfoot in them, and feeling like I'm running with marshmallows attached to my feet makes me hungry...
Posted by Adrienne Taren at 7:14 PM