I took home my Cervelo P2 with both the stock saddle and a tester - the newly released Fizik Tritone K:ium. After a few weeks on the trainer I was sold on the K:ium, despite the small additional dent it made in my wallet (small price to pay for happier ischial tuberosities, right?)

I was curious to try a shorter nose saddle after riding a pretty minimalistic Oval Concepts saddle on my road bike for years (which served me quite well). The Tritone K:ium is fairly narrow and less plush (compared to the Adamo I also tried), but has just enough padding for my bony butt to feel fine for up to 3 hours on the trainer (and possibly more, but 3 hours going nowhere is enough for me). Equally comfortable when getting into an aero tuck. There's a graded channel down the center that relieves some additional pressure up front.

The main problem this model solves for me is plain and simple - there isn't TOO MUCH SADDLE! For someone with a narrow build, the width is perfect, and the moderate cushion is just right. The width at the front end remains narrow, whereas other noseless models I tested were uncomfortably wide at the front given my body frame. There's no extra material (65mm of length, to be exact) up front where I don't need it - no body part exists that would rest there; with a longer nose, I only bump my legs against it when I get fatigued and sloppy (we're working on that) and catch my shorts on it when mounting and dismounting (yes, I might need less-stretched-out shorts).

Bonus features: a hook under the front for racking your bike in transition, and on the back for mounting 2 bottle cages, a cartridge, and a tube.

And of course, it looks pretty badass ;) 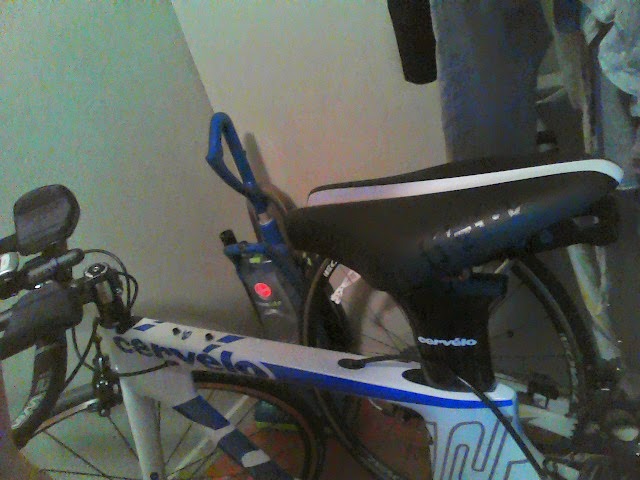 Posted by Adrienne Taren at 8:17 AM