First half of the season is in the books! And it was a doozy.

I took a ride across the state of PA to Beltzville State Park for CGI Racing's Black Bear Triathlon. Say what you will about the Poconos, but the park was beautiful! Got there and grabbed my packet the day before, checked out some of the course, and hopped in the water for a practice swim.

Race day: parking and setup were not crazy at all for a big race, kudos to all the volunteers who kept things running smoothly! The majority of the 1200 participants were in the sprint or olympic, leaving ample space on the half distance racks for me and the rest of the crazies.

The swim: designated warm-up area was SUPER nice. The water temp was around 65 degrees and the half distance women were the very last wave, so plenty of time to adjust to water temp and get my cold-induced hyperventilation out of the way. The swim was clockwise and well-marked by buoys every 100 yds. An in-water start and the chaos began! I found a rhythm fairly quickly, and hugged the buoys up until the last turn. There's always that one buoy that I can't find...it's cool, I need more swim volume anyway :) 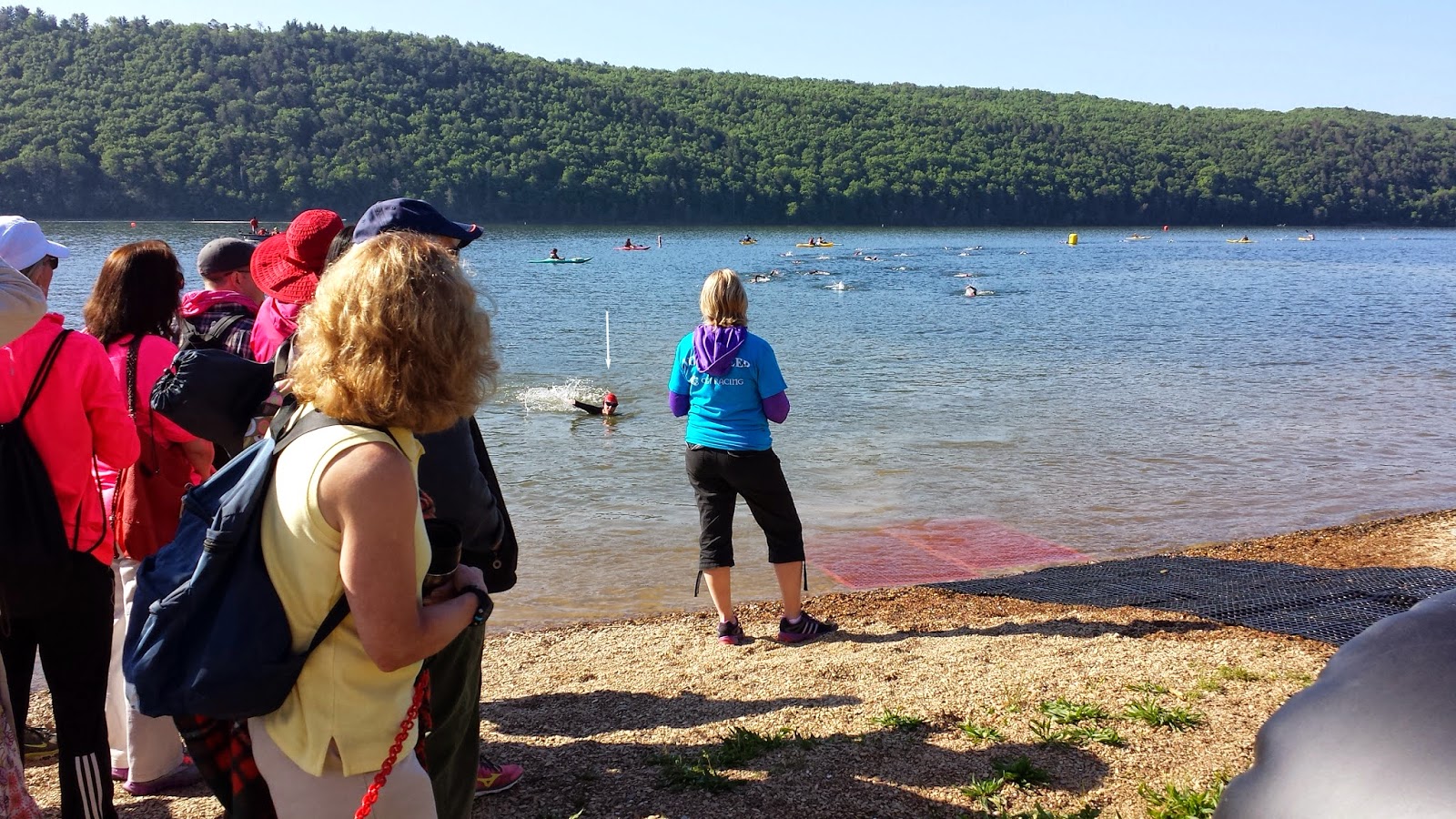 T1: Loooong run with the bike out. Excellent opportunity for working on the shuffle-in-bike-cleats technique. Also, the sand volleyball court in the middle of the bike-out route was kind of evil, CGI.

The bike: And away we go! About 10 minutes down the road I hopped off to fix a (fortunately minor) mechanical. People around me are already cursing the hills and we're, uh, 5 miles in? Cycling in Pittsburgh should prepare you for hills. Being a lightweight should make it easier to climb hills. While both of these factors helped, nearly 6000 ft of climbing in 56 miles is tough no matter how you cut it. The bike course was certainly scenic, and fairly low-traffic. But I have never seen so many very fit people in aero helmets and zipp wheels off their bikes walking up hills. There is one in particular, towards the end of the loop, that's a quick descent into a sharp left up a steep hill - so after scrubbing speed to corner, almost no momentum going in. I probably should've followed suit and gotten off and walked it, because I think I was biking slower than I could've walked at that point. I left with my climber-pride intact, at least. Needless to say, that was my slowest bike split ever, but it appeared to be most people's slowest bike split ever. If I go back, I think I'll take the road bike for the extra granny gears and lighter weight.

T2: HOORAY NO MORE CLIMBING!!! $#^&%, my quads are shot. Good thing this is just supposed to be a heavy training day. Time to run!

The run: So, when they said "challenging run on trails", they also weren't kidding. The first mile made me wish I had my old cross country spikes on instead of Hokas. But also made me happy, since I not-so-secretly love trail running. After you pop out of the woods, you hit a giant gravel downhill and a giant gravel uphill. Then an out-and-back on a concrete bridge with the sun beating down. Notes for next time: wear a hat! Reapply sunscreen! The rest of the loop returns back on the trails (yay shade!) and then you get to do it all again! Incredible camaraderie out there amongst the half distance athletes at this point; there were some incredible and supportive people out there determined not to let this course beat them or anyone else. I had a nice chat with a seasoned vet who declared this course harder than his 3 IM Lake Placids. Masochism loves company. 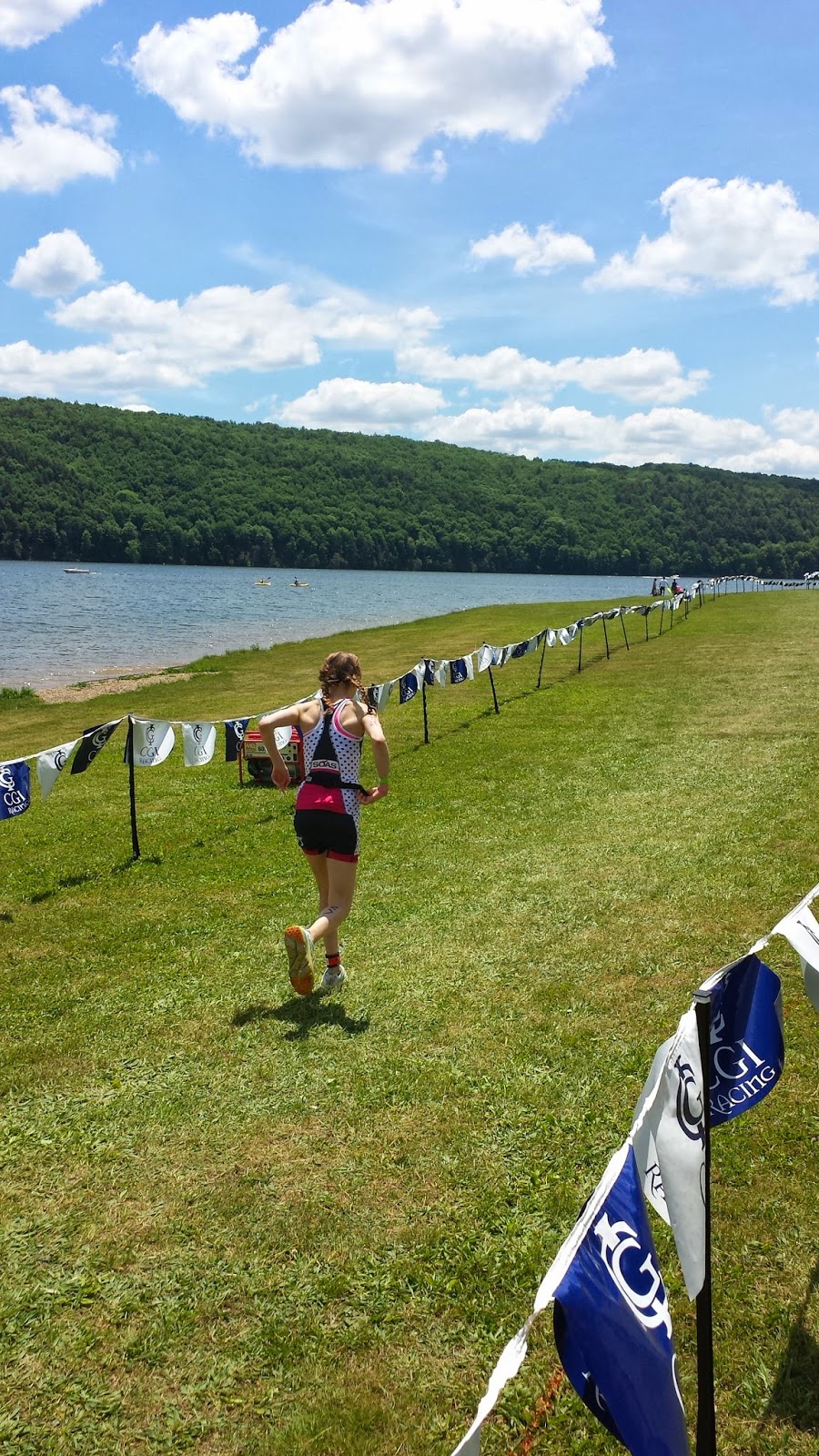 For this glorious suffering, you're rewarded with a big-a$$ medal. With a spinny thing in the middle. This pretty much made my day. After that long a training day, I had about enough juice left to be easily amused by a spinny thing on a medal, and drive 5 hours home while eating 2 lbs of cashews. Overall a well-run beast of a race and a solid early-season effort out of my body!

Black Bear, I'll be back one of these years to get my revenge...
Posted by Adrienne Taren at 8:02 PM