This was not my day. I still loved this race.

Musselman has a great reputation for good people and personal touches that you won't find at an Ironman-branded race. First, signing the Mussel Mural the day before. Note the nice sunny day, and that super cute Mussel discarding water cups on his way to the finish line. 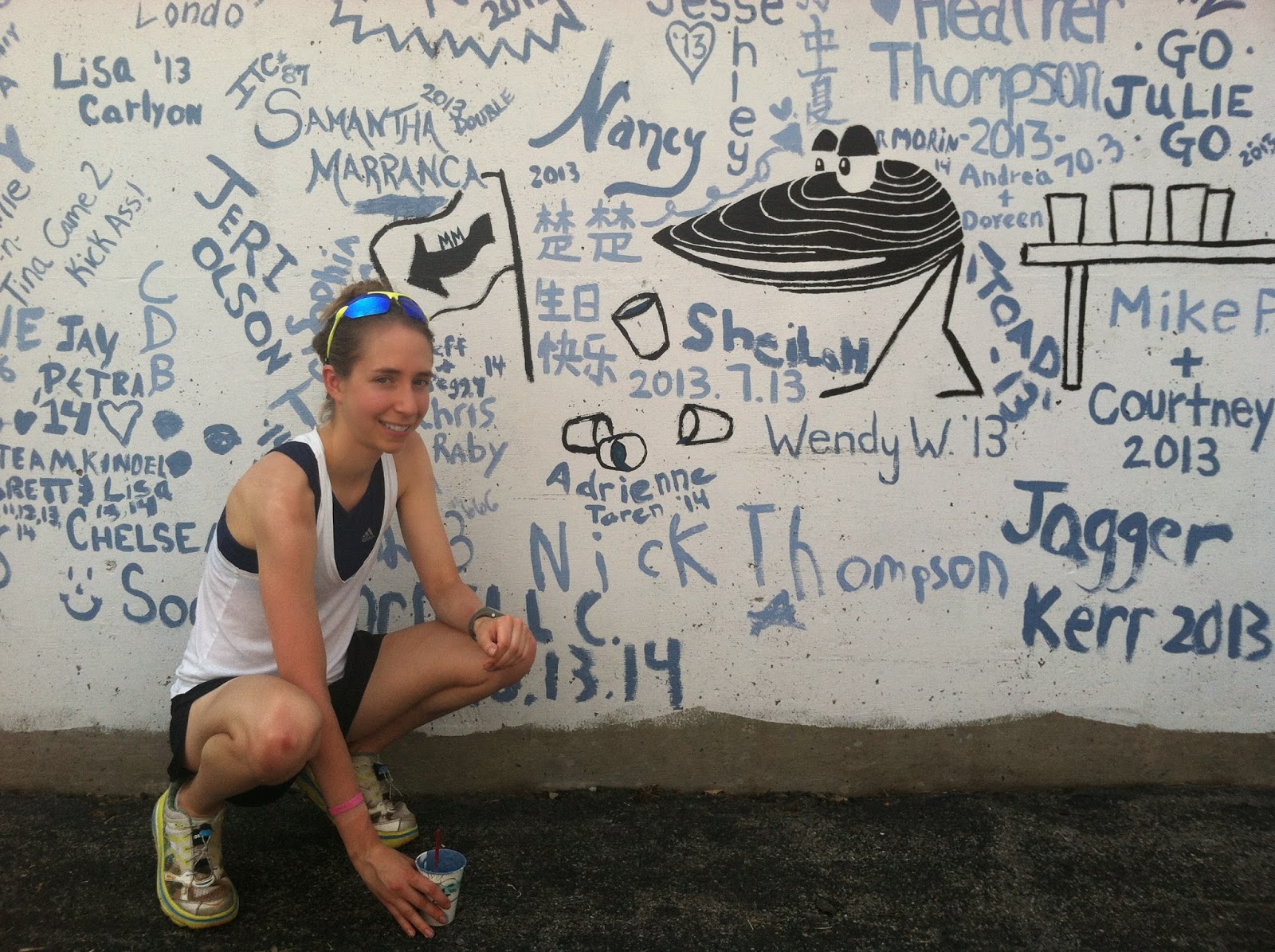 My other favorite part: they asked us a random question during registration (which I did back in November, and have no recollection of) and turned it into a message on your bike rack in transition. This year: Describe the best version of yourself in one word. I figured I had written something corny and type A endurance athlete-like, which I did, resulting in "Be RELENTLESS today, Adrienne." 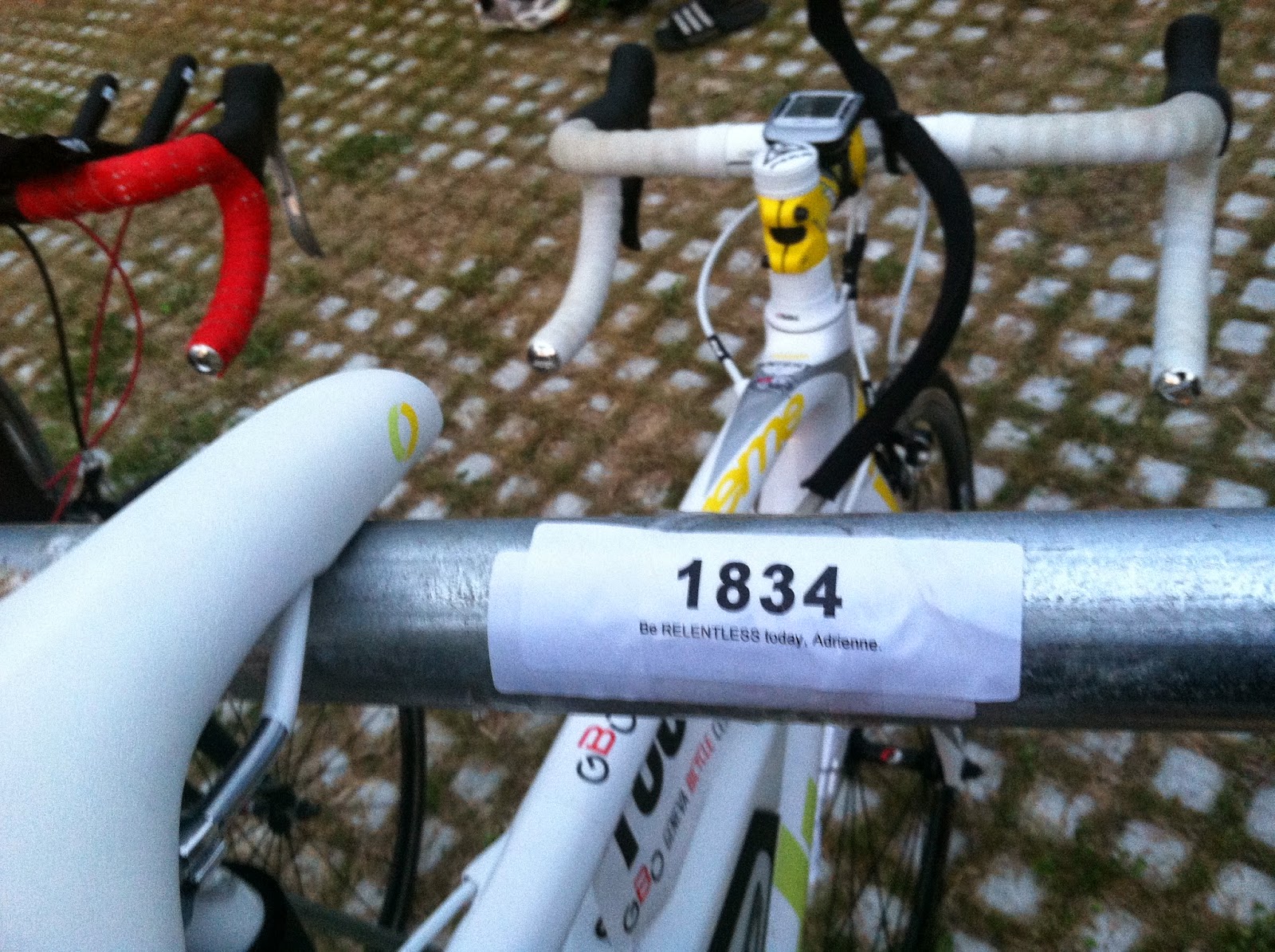 I walked around and looked at a bunch of the other ones afterwards, and there were some winners.
"Be BAZINGA today, Jill."
"Be TIRED OF ANSWERING ALL THESE QUESTIONS today, John."
"Be OLD today, Bob."

The Swim: in which I learn that tiny people and big waves don't mix well.

It was a chilly windy start, and I watched the three waves in front of me run through the shallow-ish portion for a good couple hundred yards before they even started to swim. Silly people, don't they know that it's faster to be swimming than running through the water? I've aquajogged to China and back, and I know this to be true. It looks deceptively calm here: 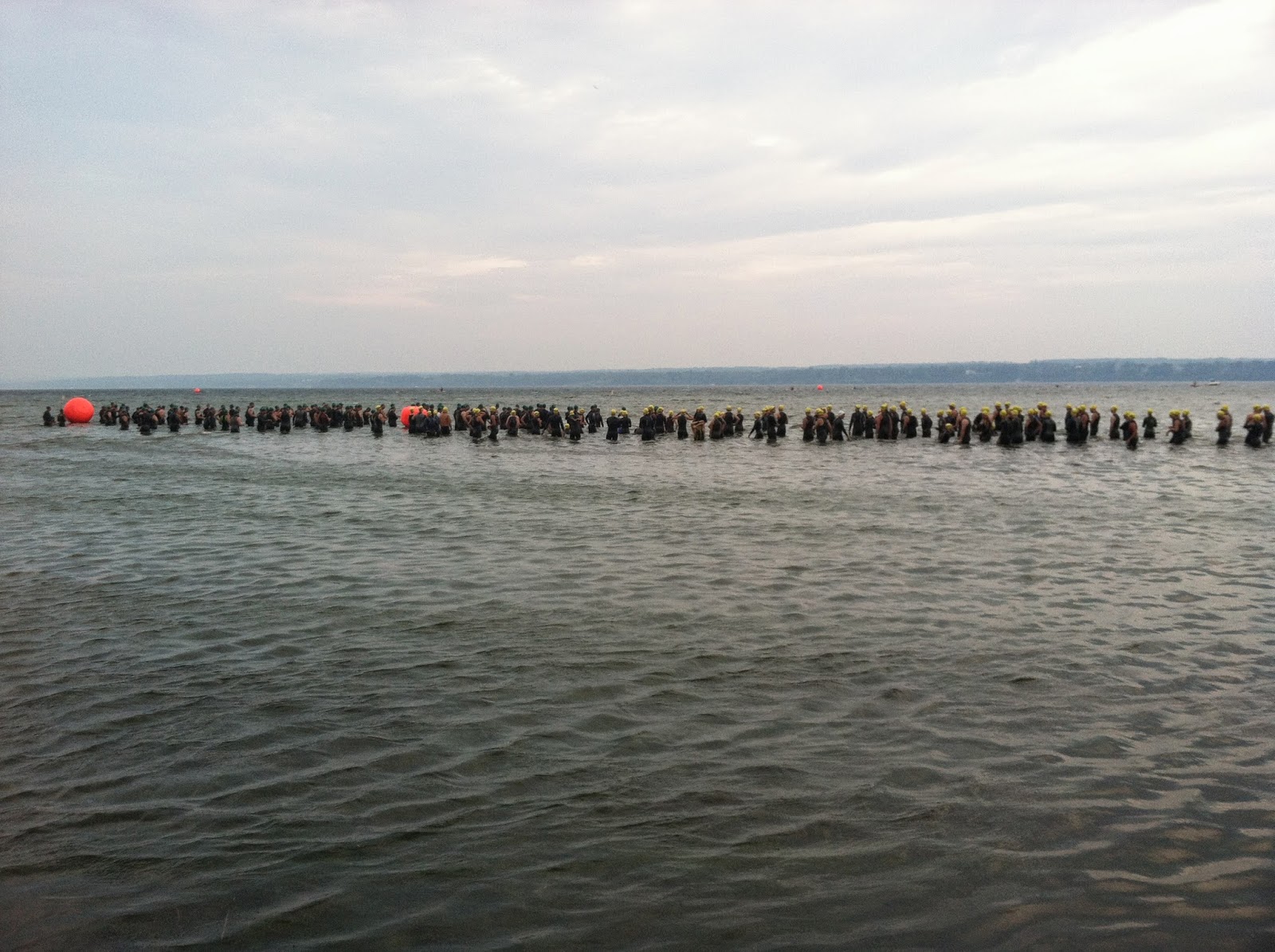 Then I got in the water, felt the chop and current pushing me back, swallowed those words and ran through the water like everyone else. After a few minutes, I started to dolphin dive and stroke. That chop turned into swells the farther out we got, and did not let up. 3 long strokes forward, water pushes you half that distance back. I let the swim PR thoughts go, focused on breathing in between swells, and staying calm. I came out of the water 5 minutes slower than last month, in just under 40 minutes (eek) and chalked it up to a learning experience. Side note, the volunteers out there in kayaks were amazing - that couldn't have been a fun job that day, between rain, wind, cold, and pulling unhappy triathletes out of the water - 38 DNFs in the swim.

The Bike: in which I learn that I can, in fact, bike through a tornado.

I am a weather wimp on the bike at home - rain = trainer - and I paid for it today. Because you never know, a tornado might touch down 20 miles south of where you're racing (for real, that happened). On the bright side, I now know how my race tires handle in a storm.

The first 15 miles were tough, a false flat into a 20mph headwind. I will be the first to admit that I have no clue how to race 56 miles on a bike yet. I went more conservatively this time in the beginning, but in retrospect could've pushed harder in this section. After turning off out of the wind, I took advantage of the real flat road and hit an average 22mph for the next long stretch. And then it started pouring...after riding conservatively for a few miles and gaining confidence on the slick roads, I tried pushing the pace back up again. My body was just not having it on the bike this day, though - no excuses, just a bad day. Maybe I didn't taper enough, maybe it was my arthritic SI joints giving me hell because of the rain (yes, I'm secretly 80 years old), maybe my spirits were just dampened (ha! rain pun) by the numbers I was seeing (and if so, the garmin needs to stay at home next time. I always ran better by feel...) I'll be honest, there were points where I really wanted to stop. That's not normal for me. So I went one mile at a time, slowed way the $^&! down when the rain got too heavy to see well (which was right where I hit the 4 mile unpaved trail through the state park - really, course planners? an off-road section? I know, suck it up, Adrienne.) People were flatting, losing wheel spokes, and one dude in front of me went over his handle bars. I sang "Stayin Alive" in my head, followed by "Ice Ice Baby", which is a strangely calming, rhythmic, distracting song. I laughed, I cried, I did deep vagal breathing, and non-judgementally acknowledged my thoughts/feelings/physical sensations (mindfulness experiment, N = 1), and made it to T2 in record slow time. The women next to me goes "this is the worst half ever right now." Part of me agreed, and part of me still thought this was awesome, because this is what I love to do, and it was clearly a mental toughness day, and it's a really good feeling to win that battle even if what the clock says is godawful.

T2: It is time to RUN! Let's forget for a second that I haven't managed a run greater than 5 miles in the past 3 months, and I now need to do 13. Plenty of run mileage was accomplished in the deep end of the Greater Pittsburgh YMCA swimming pool. If you have the mental tolerance to aquajog for 90 minutes, I think you can do pretty much anything. So now there's nothing to do but hope that resting those unhappy joints paid off. Every running coach out there and all my former track coaches (Hi Mike! Hi Nicole!) are cringing right now, sorry guys. I really wanted to do this race. So I squished away through the rain in my wet socks. I thought about going sans socks given that wet socks are pretty useless, but then I heard my mother's voice going "WHERE ARE YOUR SOCKS??? NO WONDER YOU'RE SINGLE!!!) in my head (yes, she really said this at a previous race, because whether or not I'm wearing socks is apparently directly correlated with my relationship status), and left my socks on.

The Run: in which I am very happy.

I went out guns blazing because I figured I had nothing to lose, and within a mile found a nice guy to pace with. It must've been because I was wearing socks. A few miles into the run course there's a nice steep uphill on grass (wet grass) and I go "feels like cross country!!" a little more happily than is probably normal for someone running up a steep grassy hill. It turns out that was a great conversation starter, as my new friend coaches high school cross country. So we had a nice long chat. Rick, if you ever read this, I think you saved my run and you were my favorite person in the world for an hour and a half. My brain kept trying to body-scan for pain in my joints, and you brought me right back to the present each time. We slowed down quite a bit but time was already irrelevant to most people at that point. Like all good cross country coaches, Rick told me to go ahead as we reached the last couple miles, and I waited semi-deliriously at the finish line to thank him. The fact that he didn't seem to be bothered by the fact that a sweaty rain- and lake-soaked woman he met a couple hours ago was hugging him whilst holding 5 bananas is another testament to this guy.

The chiropractic tent marveled at my out-of-alignment SI joints and popped my pelvis back into place (thanks guys!), I ate a lot and found my Pittsburgh people. So a typical post-race. All around, I was satisfied.  On paper it sucked, but I still felt like I got a lot out of myself. The DNF rate was sky-high, and it was certainly a rollercoaster. It took me a good 6 years to figure out how to really run the 5k, and it's probably going to take me a while to put together a really good long course tri, no matter how fast I think I should be based on what I'm seeing in training. This is a learning year. And Musselman, you sure threw pretty much everything at me. 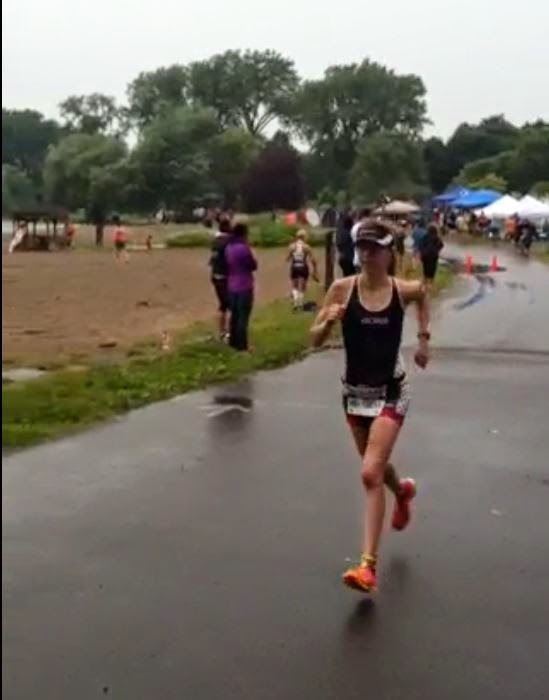 Posted by Adrienne Taren at 3:59 PM