So let's start by noting that my computer has apparently developed a Pavlovian response to seeing emails from David McQuillen (even when they contain fantastic pre-release videos for review). It goes into full panic-attack mode. Revolver is so suffer-inducing that it crashed Windows four times.

I live in a place that is frequently gray, cold, icy, and overrun once a year by Furries. So I've done my fair share of dreadmilling, during which I usually stare into space, listen to medical review lectures, and silently judge other people's run form. We now have a more entertaining and inspiring option - after many years of producing outstanding videos geared at training actual cyclists, The Sufferfest is moving into the running world.

Before we get to my Revolver test-drive, here are some facts: three vids will be released on July 31st 2014 - The Machine (38 minutes), Steamroller (45 minutes), and Revolver (30 minutes). All feature Officially Licensed footage from Diamond League Track & Field and marathons from around the world. Workouts were designed by elite coach Neal Henderson of Apex Coaching.

So, for any other ex-trackies, think of it as 9 x 200-400m repeats (depending on how fast you are) with short jog rest intervals.

Perceived effort cues are graded from 1 to 10 (1 = "Sofa.Beer.Repeat", scaling up from easy jog to 5k race pace, culminating in 10 = "AGONY! GLORY!"). Also on screen, you have % grade, interval time, and an additional cue for when the interval is about to change.

THANK YOU, Sufferfest, for including cues on GOOD FORM in the warmup: upright stance, relaxed shoulders, head up, strong core. Now the judgy girl on the treadmill next to you will be a lot happier. Note: take a minute and do some glute and hip activation exercises before you get on the treadmill too, especially if you sit at a desk all day. 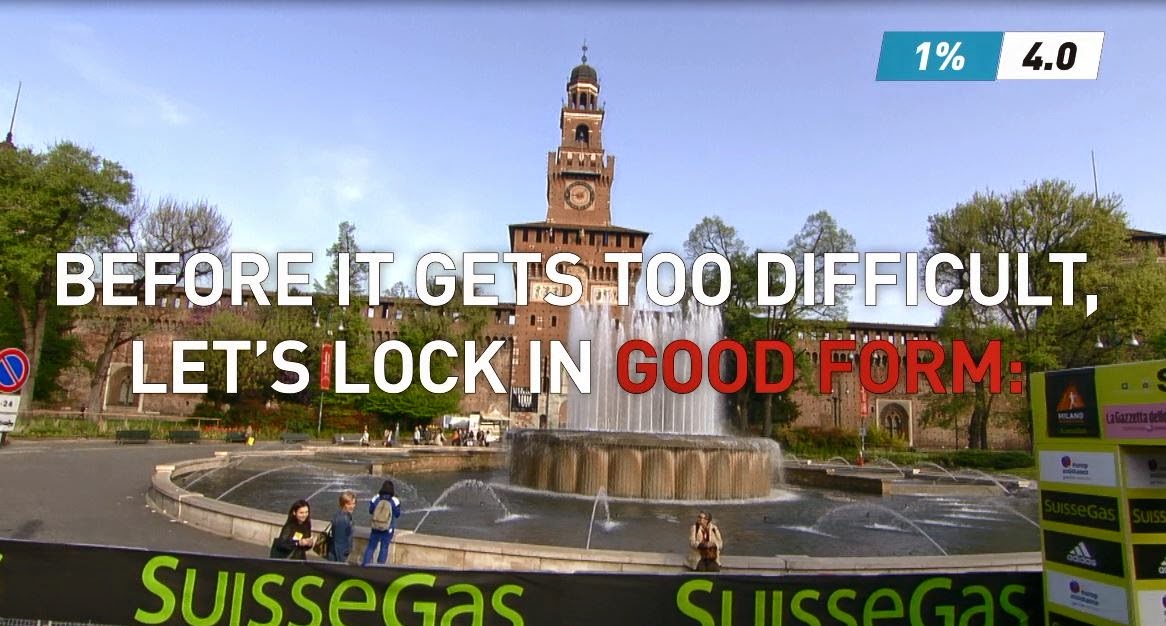 The warmup builds up some speed and elevation as you watch the Milan Marathon take off. You build all the way to 5k race pace (thought stream: hmm, haven't raced a 5k in a year and a half - which means I should go with my 5k PR pace, right? Delusions of grandeur. College me would be embarrassed by the hyperventilation that's starting to happen. Maybe I should go back to short course racing.)

Recover easy and get ready for the meat of the workout. The video pans to a bunch of tiny women on the start line of a track. Now this I can identify with. There's even steeplechase! It almost makes me wish I was down at the CMU track dodging undergrads playing quidditch on the infield, but then I remember it's Pittsburgh and there are frogs raining from the sky and that's why I'm on a treadmill being virtually tortured by David McQuillen in the first place. Back to the video. 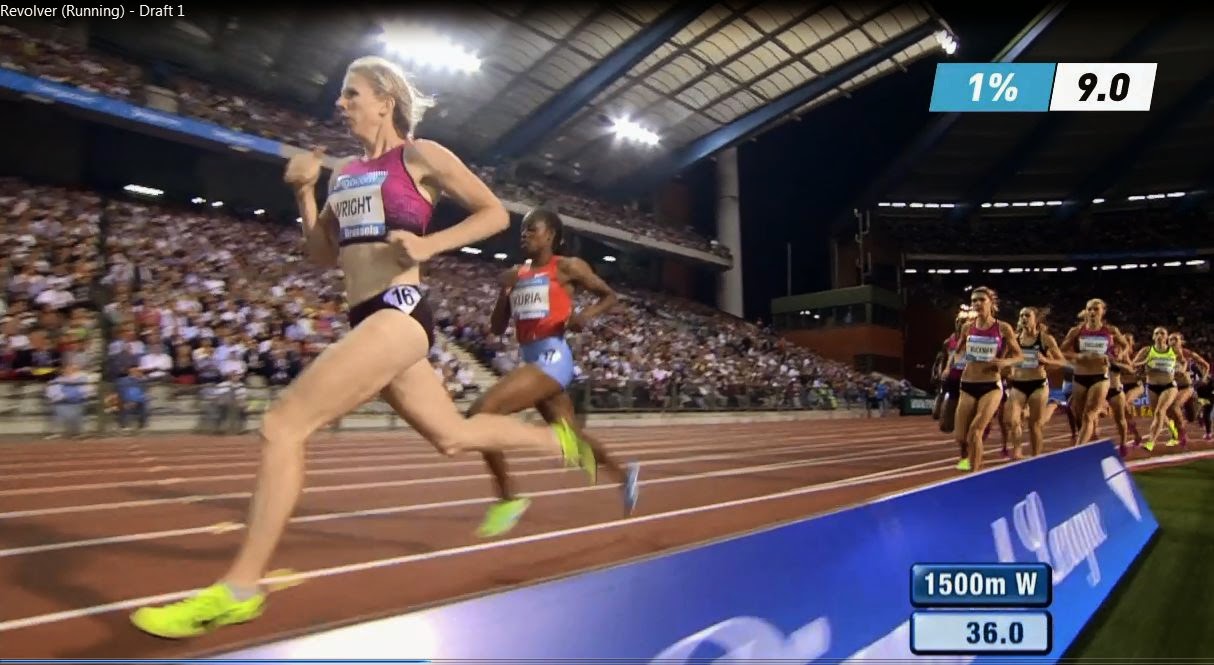 BOOM. 60 seconds hard running. Feels damn good. Recover and repeat. There are some typical Sufferfest surprises thrown in (e.g. time warp, inspiration from Nietzsche) to distract your brain from what your body is doing.

The recovery intervals cut back to these dudes still on the road in Milan, who look pretty effortless but are probably running 4 minute and some change/mile pace: 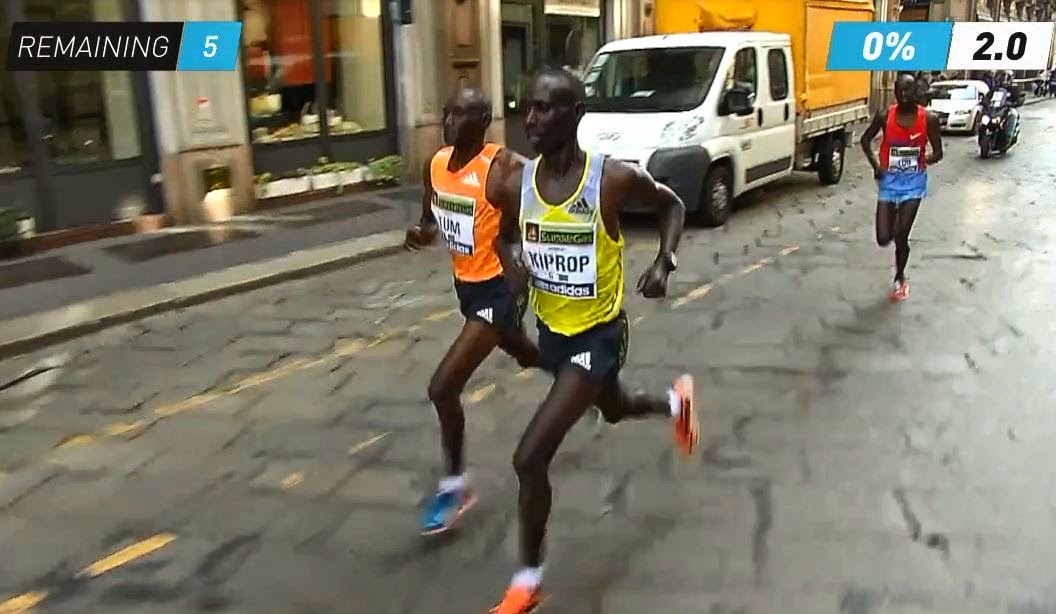 That blur right there is a hamster reminding you to go faster, which happens if you move all parts of your body faster. Hamster is Sufferfesting voluntarily, so don't call PETA. Also, I wish I had his turnover. 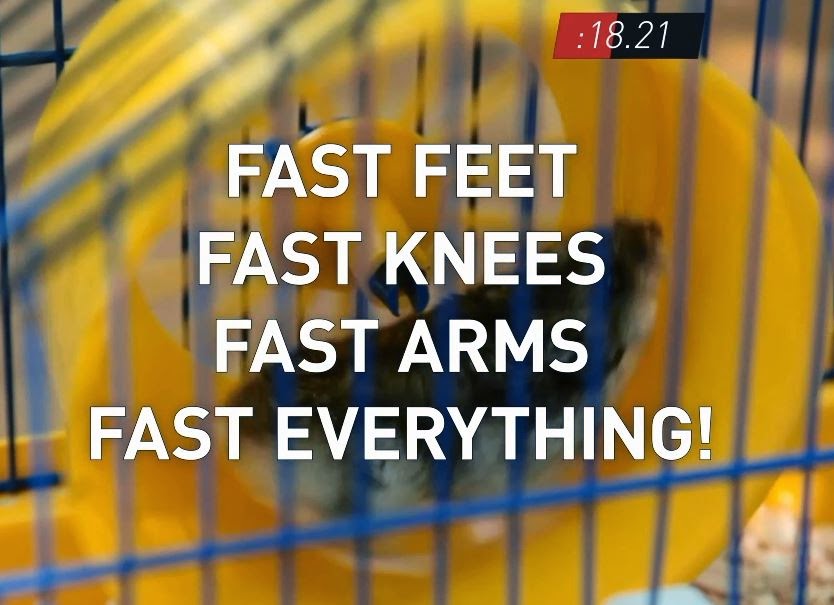 If you did it right, this is roughly what you should look like after your workout. 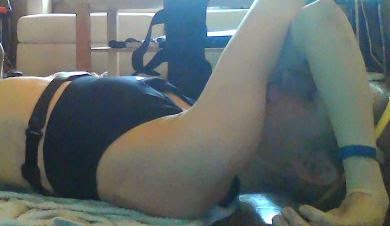 In sum, this was a great quick high-intensity run (especially for the time-pressed, as it fits neatly into 30 minutes). I feel obligated to add one caveat - make sure you're used to running fast on a treadmill before attempting. If you're comfortable doing strides with good form and hammering out some track repeats, you're golden. If you're not, I still think this is a great workout, but build into it carefully and keep an especially good check on your run form. So runners, go forth and suffer.
Posted by Adrienne Taren at 6:28 PM

Email ThisBlogThis!Share to TwitterShare to FacebookShare to Pinterest
Labels: Training