One last nice quick olympic distance race this season (famous last words)...out to Quakertown, PA for the Steelman Triathlon, a little ways outside my hometown.

The swim: A deep-water start in Lake Nockamixon, which was a balmy 74 degrees. Which was way warmer than the air. Although both the olympic and sprint athletes went off in waves, the olympic waves were large (men and women under 30, athenas, and clydesdales all at once) - so plenty of people to (attempt not to) swim over, around, and clock/be clocked in the face. The pack thinned out within the first 5 minutes though, and I found myself in the familiar no-man's land position between the fast dudes and the not-so-fast everyone else...no drafting for this girl. "This is AWESOME training for Swim the Suck!" says my happy open-water brain. "Also, aren't you so glad you decided not to taper your 20k a week swim volume at all because Swim the Suck is in 9 weeks?" Super happy. Maybe that's why my arms are tired? Despite feeling like I was swimming through molasses (which I'm pretty sure I wasn't, because I swallowed some of that lake water, and molasses would've been a lot tastier), I came out of the water in relatively good position (6th woman in my wave by mom's somewhat-accurate counting skills). The swim exit ramp out of the dock was slippery, so thank you to the nice volunteers who were keeping tabs on my less than graceful emergence from the water. 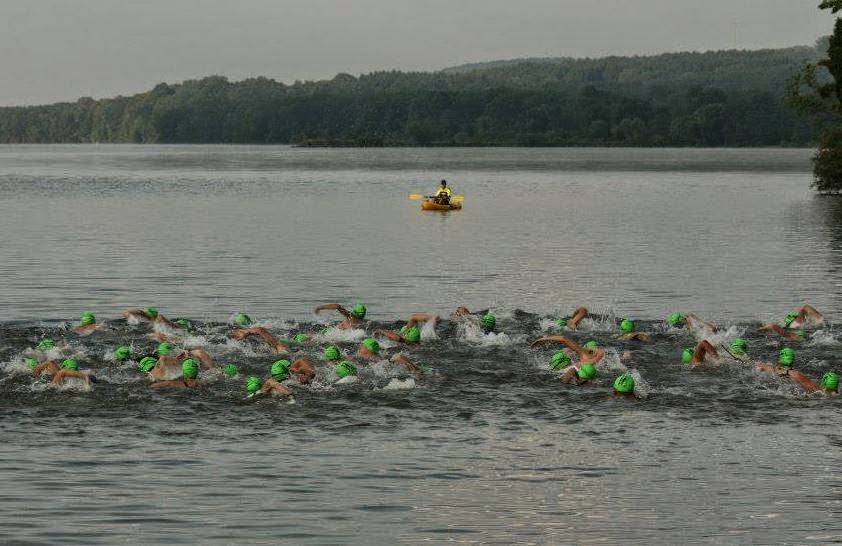 The bike: Was not flat. But I'm not complaining, it had nothing on the other courses I've done this year. About 100 yds out from the mount line, there's a nice little 1 mile Cat 4 climb out of the park, then onto the roads. Closed course, 2 laps for olympic and 1 for sprint. A+ for no cars, C- for bad triathlete behavior (passing on the right, a dearth of "on your left" (or right) warnings. Things got a little hairier once the sprint athletes got out there; the downside to your bike course consisting of a series of out-and-backs on one long road is the bottleneck that starts to occur with 1200 people on bikes at the same time. Particularly those mid-road U-turns at either end. But the sun was shining and it was a nice day for a bike ride, so I go to my mental happy place, sing Bon Jovi and Vanilla Ice to myself on the descents while heavier riders than me (which is everyone) blow by me with their damn momentum, brake to a nice safe 5mph to hop over the large rectangular speed bumps, and return in one piece. My mother the race volunteer happens to be the Dismount Nazi, which is highly entertaining for me. How often do you return from a ride and your mother is standing there waving a flag and yelling at you to please dismount your bike HERE?

The run: Note to self, when moving lock laces onto race shoes, lace them through the loop on the tongue of said shoes. It's there for a reason. Wet feet going into un-anchored-tongue shoes results in another slow transition. But now we're at the fun part! I depart to run sans-watch so as to relieve run-pace obsessing/stress and probably hammer out a 6 flat mile to start out of habit, which is too fast for the shape I'm in. Whoops. The run course is mostly flat and mostly shaded, and goes in circles - first to the left around the marina, then back out the way you came further into the park, with two loops with one turn around point for the sprint and two loops with a different turnaround point for the olympic, and a figure 8 thrown in there somewhere. It's enough to make you dizzy. The path is narrow and you run on the left, pass in the middle, which creates some further confusion and a lot of side-stepping. Aid stations are frequent and stocked with water, ice (which I dump on my head), and gatorade (swish and spit). The middle miles are one half shoot-I-went-out-at-the-pace-I-used-to-run-in-college and one half I-have-no-idea-where-I-am, and my brain muddles through some nerdy thoughts about the biochemical processes occurring in my fatigued muscles, but after passing mile 5 I throw down the hammer to the end and come away with the 5th fastest female run split of the day. Not too shabby for getting back into run shape still, eh? I'm happy. I go visit my mother the Dismount Nazi to do my post-race babble where thoughts come out of my mouth before I realize I'm even having them, laugh at myself for missing the AG podium by one spot yet again, and eat a lot of fruit. It's a good day.

Steelman is a really well-run race, despite my grumbling about the bottlenecks on the bike and run courses...I don't know that there's a good way to solve those problems. Embrace the loop-de-loop confusion and high-five your competitors as you go by. I'd love to come back next year and add in "nailing the bike course" to the nailing-the-swim-and-run-course that I did this year.

Finally, the post-race picture with my favorite volunteer/sherpa: 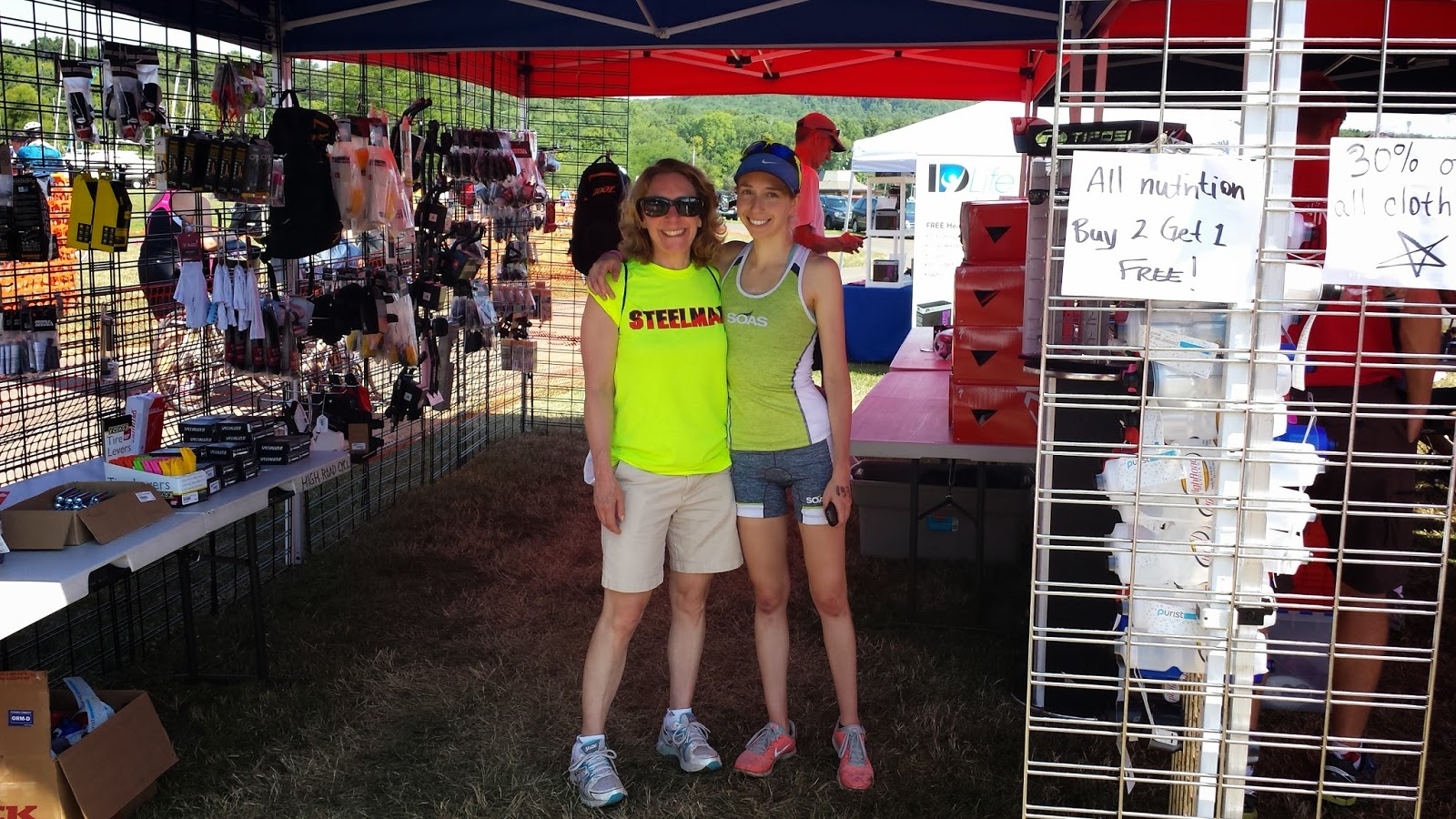 Posted by Adrienne Taren at 9:56 AM