The Pittsburgh PNC YMCA Turkey Trot is one of Pittsburgh's biggest road races, with just shy of 8,000 participants this year. What started as a little 5k race 24 years ago became a 5k and a 5 miler, and for the first time this year - with start times for both races staggered by half an hour - the option to Double Gobble. That is, to race the 5k at 9am and the 5 miler at 9:30 (a prerequisite being the ability to finish the 5k in under 30 minutes).

Coming off a season where I trained for 4-6 hour long events, I had little faith in my ability to run away with the crown in either the 5k or 5 mile individually. My run at the EQT earlier this month confirmed that there is an embarrassingly small differential between my "running for multiple miles" race pace and my kick speed. But damned if I can't crank out some steady 6 minute miles for as long as I need to. Add in the opportunity to self-test some optimal pacing strategies for double racing & run with one of my fantastic YMCA colleagues, and I was sold on the double.

The obvious first question in this type of racing situation: how do you pace the 5k and 5 mile in order to end up with the lowest cumulative time? Do you:

(1) Go for a super fast 5k, end up with a couple extra minutes of recovery time, and see what you have left in the 5 mile. Nixed this one - the difference between 10 and 12 minutes of recovery was not likely to be large, especially compared to the potential impact of getting anaerobic for a longer period of time on your subsequent 5 mile pace.

(2) Run a relatively easy 5k (but ideally keeping yourself high enough in the placings amongst other double racers to not be out of contention), leaving yourself with a pretty full tank for the 5 mile. Slightly tempting, since I would actually like to see what kind of 5 mile time I could gut out. Psychologically, I was a little worried about the effect of "settling" into a slower than normal pace on a race day for my first 3.1 miles. Physiologically (and after consulting some exercise science folks with more knowledge here than me), I decided that staying totally aerobic during the 5k was probably not necessary - over these relatively short race distances with ~10 minutes in between, 90% of your recovery is going to come within the first 2-3 minutes, and as long as you didn't totally blow yourself up during the 5k, it'll all be the same in the 5 mile.

Which led to...
(3) Tempo pace the 5k (~6:30 pace), keep jogging to stay warm in between, and maintain if not kick things up a notch in the 5 mile pace-wise. The goal was place moreso than time here, which would also allow me to scope out where I was after the 5k and where I needed to be in the 5 mile, leaving enough flexibility to run faster in the 5 mile if necessary.

The underlying question here - which would require a lot of titrated split-tempo workouts or double races to really answer - is where that tipping point is - in other words, at what level of increased 5k pace does the relative detriment to your 5 mile outweigh the 5k time savings? (interested to hear other people's thoughts on this!)

The 5k
My YMCA colleague Tim & I had similar goal paces & podium ambitions, and met up en-route to the start line. It was a cold, not-quite 30 degree day and I knew that staying warm was going to be an issue in between races. I had jogged just a 10 minute warm-up with a few strides, and was already freezing up on the start line again. I set a 6:30-6:40 pace, which kept both of us working a bit but still conversational (minus my frozen-mouth word slurring). We worked together pretty seamlessly, dodging some of the sprint-then-slow contingent in the first mile, and crossed the finish line feeling pretty fresh still. We did go for a short kick after one woman blew by in the last 50 yards or so (reconfirming for me that I have no sprintiness in my legs, or as Tim aptly put it, "you can't pull a kick out of nowhere"), but felt confident that we were on track for a solid 5 miler. The 5k really felt like just a warm-up.

The in-between
Re-grouped briefly after we crossed the finish line, threw on sweats and jogged around a couple minutes, swish and spit some gatorade (no need to actually re-fuel over these distances - plenty of muscle glycogen and not worth the potential GI upset in the 5 mile, but you can always trick your brain into thinking you've got sugar coming in with a quick carb mouth-rinse), realized it was 9:27 and I needed to get past thousands of people to the front of the start line again, ditched sweats only 2 minutes after putting them on, said "excuse me" 50 or so times until I was at the front (being in a singlet and short-shorts when it's 28 degrees helps with this. No one wants to be in the way of a clearly crazy person), and hooked back up with my race buddy just in time for the gun.

The 5 mile
Tim started us off fantastically at 6:05 pace. We dropped off a little bit going uphill over the bridges, but still picked off a couple of guys and then stayed in pretty much the same place for the rest of the race. I saw only 2 women ahead of me, and neither of them had raced the 5k, so I was feeling pretty safe. Around mile 3.5 my lovely totally numb toes started causing me to trip over my feet a little bit, and after seeing no women near me at the turn-around, I happily cruised the last mile in. Mission accomplished, a satisfying run, and at the end of a long season of racing, not a day that I needed to go to the well. Crowd support was great along the last mile, and it was nice to soak some of that in - lots of friends and coworkers out there, and some fantastic spectators yelling for the top women.

In the end, I walked away with the Double Gobble win for the women and just 3 men ahead of me (total time 52 minutes - we had aimed for closer to 50, but with the cold conditions and a podium finish apiece, no complaints), as well as 3rd place overall for the women in the 5 mile. And a Double Gobble beer stein and a pine cone turkey (tag: "This turkey was made by a child who will directly benefit from your race." Way to pull at my heartstrings, YMCA). He's a little weighed down by my hardware here, and he's cinnamon-scented, just like real-life turkeys: 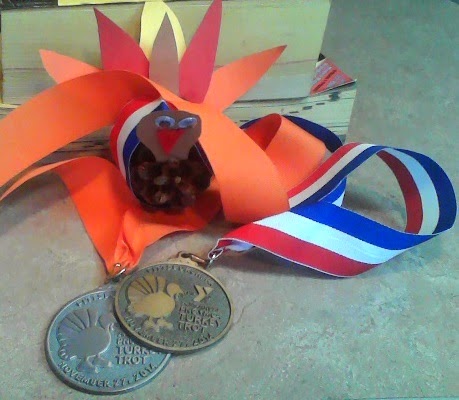 And, most importantly, I still had a great time. Highlights included magically finding my pacing partner 4 separate times among the 8000 other people there, utilizing the out-and-back loop to yell for my friends in turkey hats and neon orange tights, the Y's District Operations Director screaming for me at the 5 mile finish line, and our District VP saying "Go on wit your bad self" to me at the awards ceremony. I love my coworkers.

Goals for next year have been set: we definitely learned that we can take the 5k a good 30 seconds-1 minute faster and probably still feel fine for the 5 miler. With some more consistent run training this year, a faster kick (or any sort of kick) should be in order - maybe just fast enough to pull off a double race overall and 5 mile individual victory?
Posted by Adrienne Taren at 6:46 PM