Everyone's familiar with the post-New Year's gym rush, and the (assumed) pre-holiday gym slump. I decided it would interesting to quantify things this year, based on my cycling class. I started noting attendance just before Christmas, and tracked through the end of January: 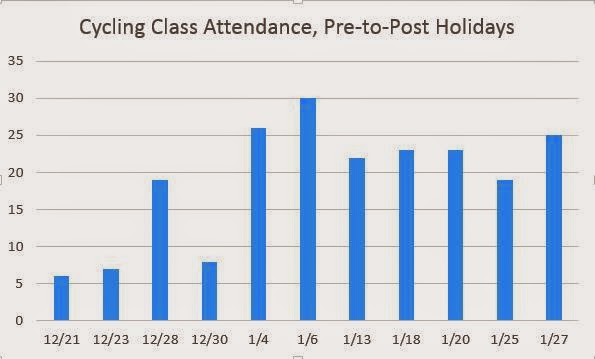 Some interesting observations that aren't apparent from the raw numbers:

1) The initial uptick in attendance in January was indeed from new people - I spent more time than usual fitting people to bikes and explaining gears in that first week. A few of them are still around, but many have disappeared already.

2) Although enthusiastic newbies have, perhaps, abandoned their well-intentioned resolutions by the end of January (see (1)), attendance has been sustained at a high rate. This is primarily due to a gradual increase in both (a) my competitive cyclists & triathletes who intentionally take a Nov/Dec "off-season" and resume serious training by mid-January, and (b) my more regular general-fitness attendees, who report intentionally avoiding the gym in the first two weeks of January because of the newly crowded locker rooms, etc. As one said "we've done this $^&@ before, and I'd rather wait a week or two until everyone's gone again." Somewhat depressing perception of society? Maybe. But relatively accurate.

3) There was an interesting up-tick between Christmas & New Year's on 12/28...as the health-conscious showed up to burn off their Christmas and pre-burn off their New Year's. Or they all just missed me.
Posted by Adrienne Taren at 8:01 AM