I'm sitting here going on week #3 of grapefruit-sized ankle and talking to a friend on the phone. "But are you just hurt, or are you injured?" she asked.

There is an important distinction between these two concepts - in how we deal with them from both a practical and mental standpoint. Let's start by trying to define what it means to be "hurt" versus "injured".

"Hurt" certainly involves pain. Being hurt may shut down more cautious or novice athletes, but with experience (or in those of us who have been missing that self-protective screw from the get-go) - you can train through being hurt. Many people are hurting more often than they are not. I've heard it said many times that no one standing on an Ironman start line (or insert highly-demanding athletic endeavor of choice) has every part of their body feeling 100%. Does that mean everyone's injured? No. Being hurt isn't necessarily dangerous. I'd argue, in fact, that learning to play through hurt has its advantages. It helps you to, within a hopefully-still-physiologically-safe space, build resilience and pain tolerance. If you can to get back on your bike after taking the skin off your knees in a spill, or run on those sore quads even though you know it's not going to be super pleasant, you'll probably (a) feel proud of yourself for sucking it up, (b) teach your brain that it's ok to hurt sometimes, (c) learn to distinguish between pain it's ok to train through (and pain it's not, see below), and (d) develop the all-important grit to keep going when the going gets tough, something you'll be able to call upon in a race situation when that inevitable moment where your mind screams "STOP!!!" comes. Learning to hurt and deal with it is part of the experience of becoming a successful athlete.

"Injured" takes you out of commission. Maybe you pushed through something you shouldn't have, or maybe there was some sudden trauma outside of your control. Being injured is, and should be, psychologically much more devastating. Mentally coping with an injury requires a different kind of toughness - the fortitude to make yourself back the heck off and figure out where to go from here. It sucks. But life goes on, and there's no reason that learning to deal with more serious failures of your body can't make you a stronger person, much as learning to hurt can make you stronger.

A lot of it comes down to risk tolerance.

If you play hurt, you're probably incurring not much risk. You may even be developing grit - necessary for success in most tough things. If you play injured, you're dumb (or you're in truly exceptional circumstances, e.g. this is the Olympics, you are planning to retire afterwards, and you have processed and accepted the potential disability that may come of your actions). Perhaps, then, the distinction between hurt and injured could be best reflected by a spectrum of the amount of danger/risk incurred by plowing on in that state. See this handy scale I made: 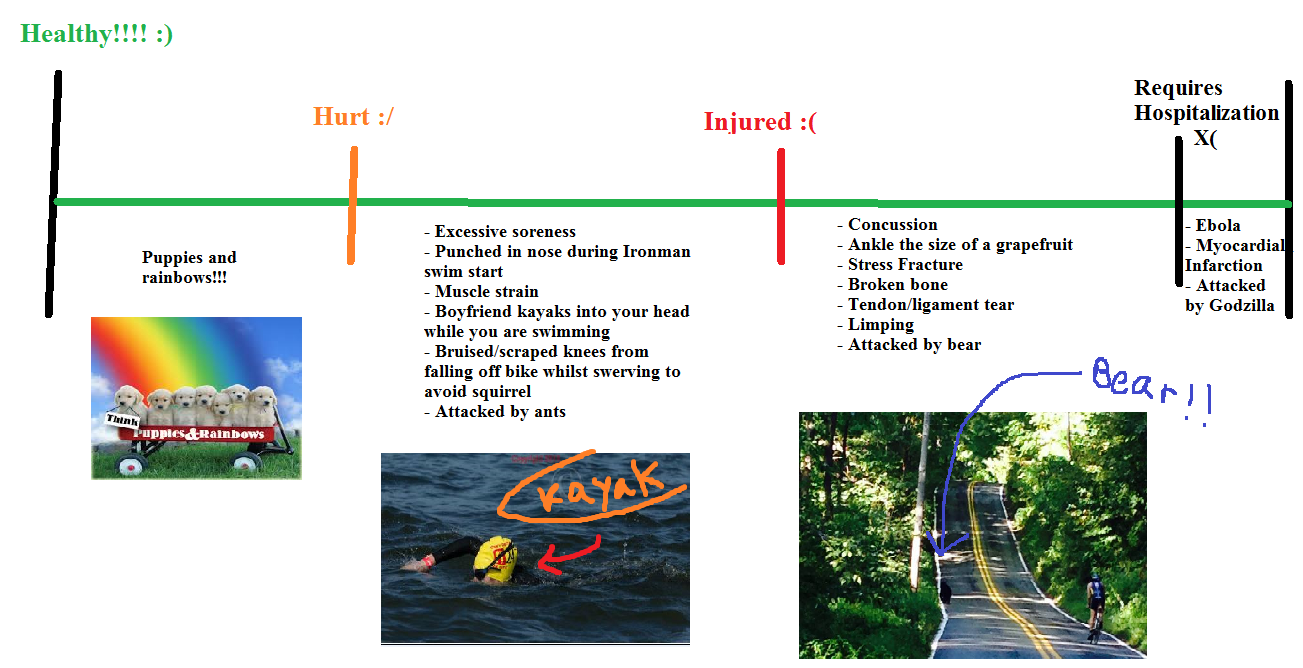 In all seriousness though, embrace the process. We will hurt, and most of us will get injured at some point. Take the time to learn where that line is for you, and learn how you cope (or don't) when you cross it. And if you pick a half Ironman for your "A" race where there are bears on the course, please ride fast in the other direction.

Wishing you puppies and rainbows, grit, and a bear-free season,

Adrienne
Posted by Adrienne Taren at 10:26 AM