New gear is fun. Especially when you can pay for it in haiku form (thank you, Triathlete Magazine!). Long story short, I am the proud owner of a snazzy pair of ROKA's new-ish SIM Pro shorts. Essentially, they're "wetsuit" shorts meant to help mimic the feel/body position you get with a full wetsuit, without the full wetsuit.

According to Roka's description, the Pro shorts are built like the Maverick wetsuit (which I can't comment on, as I'm still floating around rivers and lakes in the same little QR wetsuit I got for my first-ever tri. An ex-bf even tried to leave it at Musselman last year when I wasn't looking, but they mailed it back to me. It's the wetsuit that won't quit.) But anyways, Pro shorts have the same fancy-shmancy "RS2 technology" (buoyancy and rotation-enabling) and "Yamamoto SCS coating" which creates a "nano coated surface". Nano-what? Whatever. Just envision those water particles sliding off the surface of your neoprene-coated thighs. 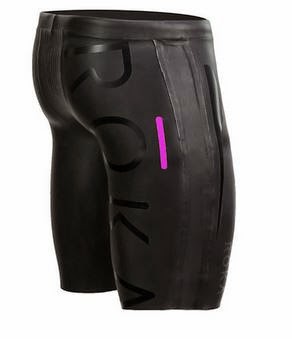 I took them for a test-run in the pool first. This is one of the major advantages I can see to these - if you want to practice wetsuit-position prior to an early season race but can't get out in open water, these are pool-safe and you won't overheat in them.

First impression: they're not as floatation-y as I was expecting (not necessarily a bad thing) - compared to a pull buoy, for example, they certainly don't just pop my butt and legs up in the water. If you're expecting to use them in place of a pull buoy, know that you'll still have to kick (at least a little) to maintain proper body position. Which is ideal, again, for mimicking wetsuit use (hopefully you kick a little bit when swimming in a wetsuit). As for rotation, yes, it's a little easier to feel - I know that I over-rotate to my right as my funky left hip drops, and it was slightly easier to sense that and re-tauten my body with floaty shorts on. Cool beans.

Am I faster in them? Not really. In a 500m time trial in the pool, I was ~3 seconds faster (total) with the shorts than without. But if they reduce (a) the energy I would normally be expending to keep my butt up, and (b) drag (see: nano-surface), why wouldn't I be faster? Two reasons:

1. When I flip turn, they take on water, pulling me backwards a bit on my push off the wall. I don't think this is a flaw with the shorts, but rather with how much I (don't) quite fill them out. I'm a tiny person and in the tiniest size (women's xs), but I've still got some room to spare. Size down if this is a concern for you. My guess is it'll be less of an issue in open water, since I don't normally do somersaults to go around buoys.

2. It's easy to get lazy on the kick. Which is partially the purpose, right? But when I normally pool-swim a time trial, I get a decent proportion of my total propulsion from my kick, because my catch still kind of sucks, which is an issue that wonder-shorts can't solve. So leaving me more energy to catch with a dropped elbow isn't really going to speed me up. Mental note to do another 500m test with shorts+super kicking.

Neither of those points negate the potential value I see in using Roka Sims as a training tool. They're a great reminder of what it feels like to swim with some neoprene on your lower body, and would thus be a welcome addition to open-water skills sessions in the pool in particular. They're good for swim days when your legs are just shot. They're good for pull sessions when you don't want to go the full-on buoy route. I've worn them a handful of times in the pool now, and rinsed them with non-pool water afterwards - they still look like new, so durability isn't an issue so far.

I'm gunning to use them in an actual open-water training session (but I'd be gunning to get out in open water butt-naked at this point, after a long fall and winter of staring at the black line) - but I'm pretty sure the water here in western PA is still hypothermia-inducing. Look for an updated open-water test-run report when the icebergs melt!
Posted by Adrienne Taren at 7:42 AM