Walk Your AS Off 2015: Team Endurance, Week 1 Reflections

Welcome to the first of several (intended) updates for Team Endurance - Walk Your AS Off - which will occasionally be hijacking my blog for the month of May. Here's a taste of what we've been up to...

There's never a good time to be hurting, but my body has a way of being as untimely as possible. I went out with a bang this time at least, but am going on 3 weeks of joint swelling - and besides needing to do basic life things and return for the last bit of medical school, I have to admit I was concerned about pulling my weight in the WYASO department. As an endurance athlete who normally puts in 15ish hours of training per week, accumulating time moving is not usually something I worry about. Sitting out a couple of planned road races was a downer, but thankfully it turns out swollen ankles do just fine on the bike - so for my part, I logged 110 miles on the trainer in our abbreviated week 1, and let me tell you, my spine is much happier for it. So are all the people who were tired of listening to me complain ;)

More importantly, I got to see some of our awesome teammates step up to the plate at the Pittsburgh Marathon on Sunday. I'm now going to embarrass returning super-stepper Ryan with this picture (sorry, pgh marathon, for stealing your photos). Ryan was pumped to convert his 26.2 miles to 57,000 steps (on Sunday alone!) 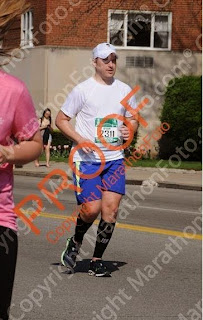 Let me tell you a story about Ryan and last year's Pittsburgh marathon. This time I have his permission to embarrass him.

My buddy Ryan also ran last year. He neglected a little something called training, though (in a major way)."I've run a bunch of marathons before, so I'll be fine!" said Ryan.

"Maybe you should drop down to the half marathon," said Adrienne. "The longest run you've done in almost a year was 5 miles. Or you could just run a fall marathon instead."

"Yeah. But it costs money to switch to the half...so I think I'll just try to finish the full." said Ryan. [side note: this man works in Rehab Services at our Sports Medicine Center. In other words, he knows better.]

So I stood around at the finish line for the 6+ hours it took the dummy to jog/walk/crawl/cry through the 26.2 miles he was entirely unprepared to run. Points for perseverance. Negative points for common sense-ness.

But here's the point I'm coming to (see, I'm getting back to WYASO, I promise) - When Ryan and I talked the day after he put his body through quintuple the miles he'd run in a few years, he said something along these lines:

"So I couldn't sleep last night I was in so much musculoskeletal pain. I kept waking up, every muscle in my legs was cramping and burning, and I had to physically use my arms to lift my legs over the side of the bed to get up."

After I kindly pointed out that it was a medical miracle he didn't have a stress fracture in his tibia or fibula and hadn't gone into cardiac arrest at the finish line (sorry buddy, know that was super helpful), what immediately popped out of my mouth was, "Welcome to my world."

I didn't really think much about what I had said, because normally other people don't think too much about it either. I don't expect them to. It's hard for others to conceptualize, and it's easier for me to joke offhandedly about it and let it go. Wry humor is an effective coping strategy that also lets people off the hook. Or, because I can do things like swim, bike and run 70.3 mile long races, or knock out a sub-60min 10 miler, it probably doesn't seem like my AS could possibly be that bad. Heck, when I can do those things, it sometimes doesn't seem that real to me either.

Except this time, Ryan just stopped cold, and said, "Oh my god. Is this what you feel like all the time?"

That was one of the first times I really felt like someone was processing what it was like to be me on a bad day (or week, month, year). That means a lot. I felt like I had just hit upon the untrained-marathon equivalent of spoon theory.

Which brings us back to this past weekend, when Ryan ran the Pittsburgh Marathon in a slightly more trained state and a lot less pain (he says, "It's a lot more fun that way."). He spent some of those 57,000 steps thinking about that conversation we had last year. Those moments are exactly why we walk, and why WYASO is important to me.

BIG shout-outs also to Annie, with a marathon PR on a hot day, and Brie with a whopping 8 minute PR at the 10 mile distance on the other side PA! Log those steps people, and have a great week 2.
Posted by Adrienne Taren at 4:45 PM

Email ThisBlogThis!Share to TwitterShare to FacebookShare to Pinterest
Labels: Autoimmune