Gratitude is a funny thing.

It seems like it should be pretty easy. For months now, I've been writing down 3 good/grateful-for things in a notebook at the end of every day, because science says it makes people happy. Which I believe. It's a simple, effective psychological concept.

Moreso than that, though, I think it's useful as a barometer for how life is going. If I'm struggling to find 3 small good things to write down, maybe I need to reevaluate what I'm doing with my days. When I sit for 15 minutes staring at a blank page, and then write:
" 1. Rebecca sent me a picture of a goat.",
something's not working quite right.

At the risk of sounding like a whiny, ungrateful person in the midst of a post about gratitude, a lot of things really sucked this year. Autoimmune crap flared, meds stopped working, the rear derailleur fell off my road bike while I was riding, the bottom bracket broke on my other bike while I was riding, I cried in my former program director's office because academia sucks people's souls out their noses and I want out, and then I broke 2 ribs.

So I thought of good people instead of good things for a little while.

And then I thought a bunch about how it's not always the people you expect, or the people it "should" be.

There's a 70-something year old dude who started showing up to my Sunday morning spin class. He's rail thin and has some ptosis and left-sided facial droop. Which is otherwise at odds with the RAGBRAI jersey and carbon sole shimanos. He pedaled slowly away in the back, and then stayed and thanked me for the class, and we talked, and he's on round 3 of a rare type of lymphoma with brain mets now. It's keeping him off his bike outside, because of balance issues from the CNS side effects. His oncologist taught me during my first year of med school. So now, every Sunday morning, I sit on a bench outside and talk with this gentleman about how life is really better when you can ride a bike, no matter who you are. And which brand of waffle maker is the best, and the failings of the US healthcare and research systems. Friends in unlikely places.

My brother turned into a really awesome adult. I'm definitely grateful for him. He is a very wise man, but still draws strange 3-legged dogs that look a little bit like hippopotami. 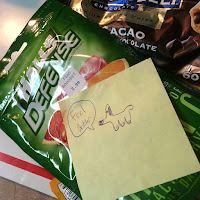 I'm grateful for two of my male runner friends who don't give 2 craps about how smart I am. And take seriously my suggestions to pack up and move someplace where bikes can be ridden outside all year, and where my Vitamin D level will be greater than 30.

I'm grateful for my bff from college, who I haven't seen in 6 years, but who let me know the other day that she was sitting on some steps because life was hard. Because at some point in our first or second year of friendship, one of us just stopped walking and sat down on the staircase in the science building, and it became a thing you did when you were tapped out for a little while. And it's nice to know that you can still long-distance sit on steps with people from time to time.

Then there's the handful of random smart or interesting people who don't even know I'm grateful for them, because sometimes it's just enough to know that there are people out there who are on the same page as you, and if they found a path through life that's not psychopathy-inducing, then you can too.

Finally, I'm grateful for these goats. 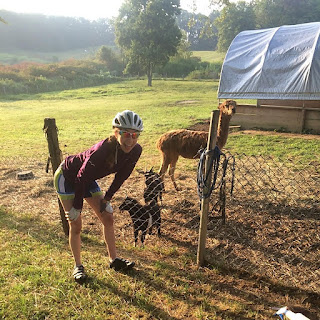 Posted by Adrienne Taren at 5:10 PM