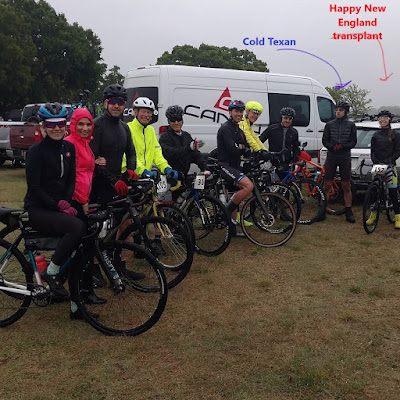 You may recall the Dirty Fury Stage Race from my 2017 recap, notable for 3 straight days of gravel craziness culminating in me missing a bag drop and my brain deciding I was dying from hyponatremia, hypoglycemia, and just Texas being Texas all at once, which all worked out swimmingly in the end, particularly after I went home and ate a whole jar of salsa.


The landscape was quite different for Dirty Fury 2018 thanks to a cold wet spring, yet wonderful in its own way. That’s the beauty of returning year after year to the same gravel grinders. A pavement 5k is going to look the same no matter what the preceding year has wrought. Perhaps you get rained on one year or you wear a different color pair of socks, but it’s largely going to be the same. There’s comfort in consistency and predictability. And while you hope the essence of your favorite gravel grinder stays consistent, the gravel itself does not necessarily do that.

Life also changes. In 2017 I was relatively bright-eyed when I showed up Friday morning, had 3 days worth of food and camping gear in my car, and could’ve done my work from the Jacksboro Community Center if I had to for several days. Ah, the luxury of flexible time.

In 2018 I shoved random items that might be useful for riding bikes and sleeping outside in my car at 5am on Friday, worked 13 hours, stopped at Trader Joe’s on my way out and bought 3 large bars of chocolate because that seemed like suitable gravel stage race sustenance, drove to Jacksboro TX, rolled out of my car and laid in the grass, mumbled some incoherent things including my intent to sleep right there, and then eventually got up and into a tent after multiple people pointed out that the thunderstorm apocalypse was coming.

Race organizer/Spinistry grand master Kevin Lee had already made the call to switch Saturday and Sunday’s courses given the weather forecast. Unlike last year’s 3 days/80-110 miles per day format, the 2018 version had moved to a planned two-day format with 110 miles on Saturday and a 42 mile race on Sunday morning/10 mile TT in the afternoon. The 42 mile course was more flood-friendly so we did that on Saturday instead. The TT was canceled. I have no top end and am currently on a drop-bar mountain bike, so I did a little dance of joy.


The 42 mile course was new this year, although I recognized the beginning and end as overlapping with Sunday’s course in 2017 (mostly because of the house that gave us Powerade after being bone-dry for 30 miles. See: missed drop bag.) There may have been other familiar parts as well, but they were rendered unfamiliar by the rain. Lots of sinking in sand, one flat tire, and a short hike-a-bike later we were back at home base, where I was repeatedly told I had mud in my hair (GASP). (I did subsequently wash the dirt out of my hair, lest the Feminine Police come to get me, however I discovered the next day that there was still dirt on my nose. Fail.) 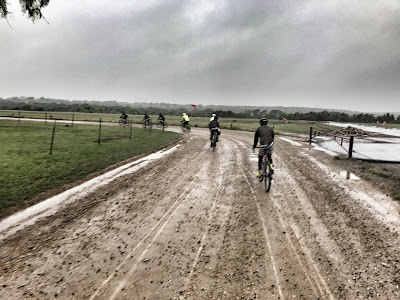 After en masse calorie consumption, most riders retreated to their hotel/motel/home, while the four really dumb ones (present company included) went back to the race site to brave the next few cells of severe weather. We spent some quality time in the rec center gymnasium and then, after much effort and with the assistance of a sardine can filled with gasoline, were able to get a campfire going without setting ourselves on fire in the process.
2 Better weather, and coffee.

Sunday was like a new day. Well, it was a new day…but you know what I mean. Sunny, dry, and 50 degrees. The biggest challenge would be head winds. The 110 mile course wound west through Graham, then dipped south before ending back in Jacksboro. The previous day’s rain had left some of the sandy sections soft, but the hardpack and loose rock that comprises most of the route had dried out. The geometry of a mountain bike was less than ideal in the wind, and I wished to the Gravel Gods for aero bars, but none magically materialized. A rogue water table at mile 45 and a Dairy Queen at mile 66 did, however. 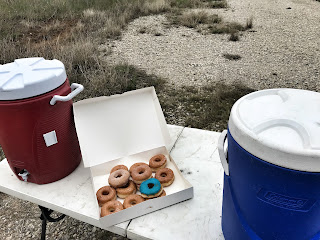 Miles 85-95 become distinctly deciduous, so much that I remembered Wild Pig Road (the road where a family of wild pigs ran in front of me last year. It has a different, much less fun name in actuality.) I waited patiently for the Pit of Despair, which was a long stretch of lacrosse ball sized loose gravel inhabiting mile 90ish last year, but it never came. I almost felt cheated, but ran into a road being actively resurfaced shortly thereafter. After dodging the road resurfacing equipment and getting a lot of strange looks from the tractor dudes, I found a rideable line in the rutted loose dirt, and was promptly chased by a dog that did not care one whit which line I wanted to ride. We all lived to tell the tale and the dog got a bonus Honey Stinger waffle out of it.


The end of every stage of Dirty Fury follows a deceptively long cinders path around a lake before dumping you back at the rec center and campground. Like all good gravel events, it involves hopping a fence at some point, and has some short punchy climbs and surprise loose rocks, just for funsies. It’s a peaceful (and joyful, on a Salsa Cutthroat) way to end the long ride and take in the views. 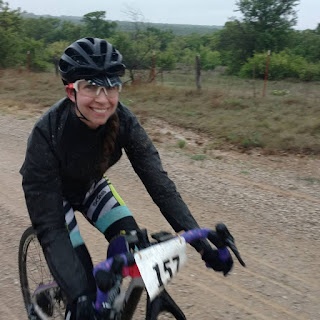