Confession: I have very little sense of direction. The biggest concern my loved ones had about me doing Trans-Iowa had nothing to do with the whole riding a bicycle for 340 miles non-stop on remote gravel B roads in thundersnow/tornado/the apocalypse, and had everything to do with my ability to navigate. I made the argument that I appear to have nowhere to go but up, so taking away my GPS really was not such a big deal, and besides, I'd been practicing my smoke signals. They were not amused.

Trans Iowa requires cue sheets, that this year were handed out on the start line. I fretted over the best way to carry said cue sheets until this neat thing landed in my lap, courtesy of Bar Yak's sponsorship of Trans Iowa. 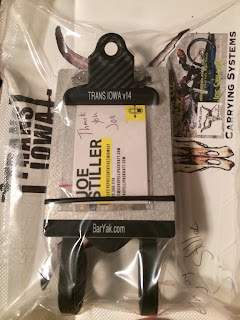 Here it is on my Salsa Cutthroat. 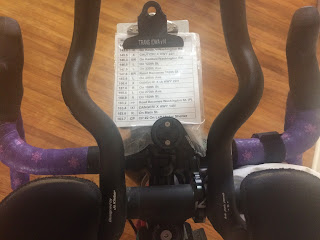 And from the bottom. 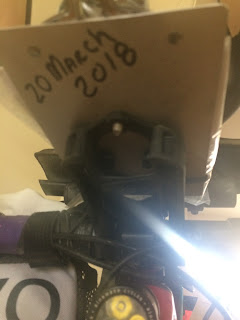 I've only done a few events with cue sheets exclusively before, primarily before I owned an evil beeping bicycle computer that tells me when to turn and then says "OFF COURSE MAKE A U-TURN" every 5 seconds. I got this possessed device primarily because I hated stopping and pulling cue sheets out of jersey pockets, or my sports bra, or wherever else they end up, and then making a mad dash after them when they tried to blow away in the wind. I looked at those plastic sheet protector-like holders that attach to your bars but always sort of doubted they were worth the money or effort.

I liked the look of this mini clipboard-style BarYak thingy, and planned on ordering one had the TI raffle not worked out in my favor.

A lot of things went right and a lot of things went sideways at Trans Iowa, and I have to say this is one of the things that went right. It stayed in place and intact despite my best efforts to destroy it with a couple of wipeouts in wind/loose gravel and another couple wipeouts in the construction site "B road". The times I got lost were user error, not cue sheet visibility/security error. Someone more coordinated with me could probably pull the cue sheets off the clipboard and turn them over when necessary, but I generally had to stop and flip to the next one. However, this was way faster with a clipboard than with pulling them in and out of one of those cue sheet sleeves. They were easily visible during the day and night (with a headlamp), no glare. I'd consider myself an intermediate-ish mechanic and could have easily attached them to my bars myself, but my BFF bicycle mechanic friend Jake at City Cycles did it for me since I was there haranguing him about other things anyway, and I only heard him swear once or twice in the process, which is about 18 times fewer than normal.

The only thing about this setup I would change: get the Q Pro up on my Fred bar to be closer to my face for reading purposes next time (contact lenses full of gravel dust = eyeballs next to cue sheets in order to read). My aero bars (ok, Jake's loaner aero bars that he said I could throw in a ditch in Iowa if I got sick of them) were set up fairly narrow, as I'm a narrow person, and it would have been a little too tight. This should be solved by going to bar ends and arm rests, which is the eventual intention.

Full specs from the people who make it here: Bar Yak Q Pro Complete
Posted by Adrienne Taren at 8:24 PM