What do you take with you for 340 miles of self-supported gravel on a secret route featuring an undisclosed amount of B roads, elevation, C stores (well, 4, but an unknown amount of distance between them), and unpredictable conditions?

Factoring in: priorities (as light as possible versus as prepared as possible), bicycle carrying capacity, individual limitations (celiac = no Casey's pizza 😒), and a preceding 80 hour work week.

Salsa Cutthroat with an Oveja Negra top tube bag, Andrew the Maker feed bag, & Oveja Negra seatjammer pack. Last minute decision to put clip on aerobars on top of a Fred bar, which I ended up using not at all in the combination of heavy head/cross winds and loose gravel that made things...unsteady. There's also a nifty Bar Yak Q:Pro cue sheet holder on there.

I used a Sinewave Cycles Beacon headlight on the front powered by a SON generator hub.

It was 30ish degrees at the start line at 3:30am, and predicted to get up to near 60. The next night was supposed to drop down into the 30s again, and it's always colder in the valleys, plus wind, so let's say high 20s. Plus you're wet from sweating during the day at that point. That sealed the decision to use the larger seat pack and take my Patagonia puffy jacket. Lightweight but takes up some room.

Around 10am I stopped and took off the glittens, cap, and wool jersey and stowed them in my seat pack. Around 9pm I put all that stuff back on.

Note the camping headlight attached to my helmet for seeing cue sheets and street signs. SO PRO. It worked though. 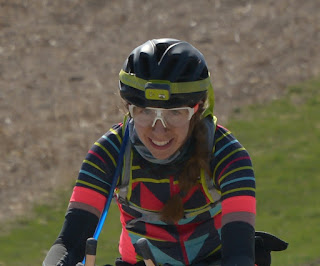 This is the fun part. 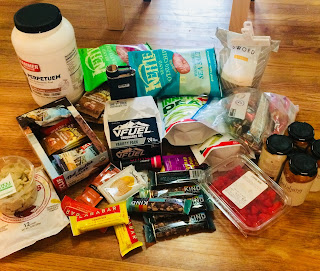 I started with around 4000 calories worth of food packed. This may seem like overkill. Maybe it was, but I now err on the side of not running out of calories given some experiences last year that ended in hypoglycemic hysterical meltdowns. Also, celiac disease sometimes limits one's ability to eat out of convenience stores. Also also, what mile the C stores are at is not revealed (ahead of time nor marked on cue sheets.) Also also also, I like food.

I packed GF Honey Stinger waffles, Clif nut butter bars, and a handful of Lara bars and Kind bars. I started with Sword drink mix in my Camelbak and 1 bottle, Nuun in 1 bottle, and took a plastic baggie with enough Sword to make 2 more bottles along the way. I'm bad at drinking plain water and am a salty sweater. I generally hate gels but DK taught me that at certain points I will not want to force down food. Vfuel gels are the most palatable, stomach-friendly, and not terribly viscous ones I've found. I had 6 of them with me for the trying times. Also learned at DK: sweet fatigue. I didn't eat or drink anything for the last 30 miles of that race. So I had ginger chews, 100% dark chocolate, and chewy Cinnamon candy in the shape of bears. Never underestimate the positive psychological value of eating something bear-shaped. This stuff all got spread out over the top tube bag, feed bag, with some reserves in the seatjammer.

I did stop at Casey's and ate some potato chips, bought more Clif bars and Kind bars, and refilled bottles with water and iced green tea.

I had some Firestar energy caffeine packets with me, but didn't use them. What ER residency taketh away in training time, it giveth in ability to stay awake.

Conclusions:
I didn't actually weigh my bike, but I guesstimated I was around 30 lbs with all this stuff. I used pretty much everything, except for my spare parts (thankfully). The only thing I had to borrow was electrical tape, for the purpose of taping lights and things that dislodged themselves from my bicycle in a few wind gust and loose gravel-induced slide-outs. I suppose I also borrowed a shot of whiskey from a group of dudes I caught up to around mile 180ish, as my Stanley flask got triaged to the hotel room.
Posted by Adrienne Taren at 9:48 AM