There are races that separate riders out during the actual race. And then there are races that separate riders out before they even start.
A fairly last-minute whim to go ride my bike someplace else had me headed to the Flint Hills in my stereotypical Subaru at 4am on Saturday morning. I had briefly glanced at the weather forecast and saw that it might thunderstorm a little bit between 2 and 3am. Approximately 1 raindrop hit my car as I drove north through Oklahoma to the Kansas border and turned west toward Winfield. And in the last 20 miles of the drive, it near-abouts flash-flooded and I hydroplaned my way into town.

So yeah, there was some trepidation about the weather. Namely, what it might do to the roads. Or to one’s bike on the road. Or really just to said bike’s derailleur.
And thus, somewhat ironically, one of the things that attracts riders to Elrod’s – a Flint Hills experience 3 weeks pre-DK – became one of the things that scared many away that morning (“I don’t want to break my bike before DK.”) 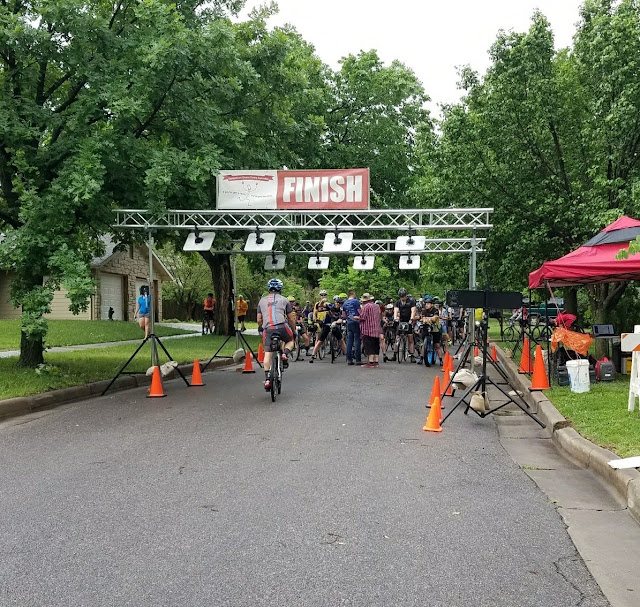 But first, a bit about Elrod’s Cirque. Elrod’s is part of the Boneshaker Rides series out of south central Kansas and Oklahoma. Here’s the origin story: a friend of the race creators dubbed “Elrod” with a distaste for out-and-back rides, favoring loops – hence, “Cirque.” This particular circle starts and ends just outside of College Hill Coffee in Winfield, a comfy little coffee shop that did not appear to mind a bunch of spandex-clad people who were already quite damp from the rain tromping around on the porch early Saturday morning, waving around number plates and twisty ties and muttering expletives at the dark sky. To make our lives even easier, there was air-conditioned housing for the weekend available a block away at the Southwestern College campus, and bathrooms and post-ride showers open to all. Riders were, however, discouraged from showering with their bicycles.

For the 104 mile race, there were two checkpoints with free drop bag service. And yes, they would even port your Yeti cooler there (and back to the start line) – that’s above and beyond service. Fresh off a string of ultra-self-supported events, I didn’t even know what to do with myself given this option, but race director Bobby Smith was kind enough to delay the race start by 30 minutes while I stood with two large plastic bags in my hands and thought about ALL THE STUFF I could send ahead for future-me (ok, so maybe the race start was delayed because of the weather. Still.)
Eventually we lined up for an 8:30am start. A handful of people who were already fully kitted-up got back in their cars with their bicycles, headed for drier pastures. Having broken expensive bicycle parts in mud before, I can’t really fault them. But I came to ride my bike, and I needed to ride my bike, even if I slogged through stretches of Velcro-road and pushed my bike and sat in the mud fixing things on my bike.* Bobby made an impassioned pre-race speech, the highlight of which went something like “It may start to lightening and hail, please use your brain and hide in a barn or something if this happens.” “Sounds logical,” thought I, and we rolled off down the road.

*All of these things ended up happening, so I’m glad I pre-contemplated them. Yay me.

Another three-way split occurred just miles into the race: one group turned right for the 104,  a group forged ahead for the 50 and 27 mile rides…and another group peeled off to the left, onto the pavement, to get a ride in sans-mud. For those confused, pavement is hard stuff that some people ride bikes on. It involved staying relatively clean. Sometimes very thin and smooth tires are used. It hurts much more if you fall down on it.

Winfield lies about 100 miles south and slightly west of the more well-known Emporia Kansas. There were both similarities and differences in the terrain; the same biting Flint Hills rock, the same beautiful green grassy doubletrack sections. A bit more sand-mud-limestone, the kind that acts like Velcro when you ride across it. We would hit long smooth sections, perfect-looking roads, and instead of flying just…squish. I took the extra squish time to appreciate some longhorn cattle and horses prancing around in the greenery, likely wondering what these silly spandex people were doing. The first real dismount came at a water crossing with just enough current for there to be a kind volunteer present ensuring nobody drowned. 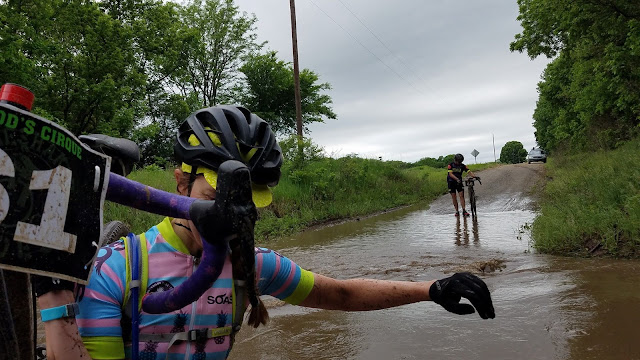 Not too long after, the squish got real. Really deep squish. Trail-of-broken-bicycle-parts squish. When I passed the first person converting to single speed, I decided it was probably time to hike-a-bike. This would’ve been a good time for skinny tires on the cutthroat, and I envied my single speed friends who were slightly more successful. I also gained some useful knowledge about the tires I was running here – Terrene Elwoods. They’re fairly bombproof and they roll well, but mud tires they are not. I accumulated enough sludge and rock on my tires that it was like they had birthed several other baby Terrene Elwoods, or fulfilled a lifelong dream of growing up to be Fat Tires.

After a few miles the folks I’d been trudging behind seemed to be having success riding again. I washed the pounds of mud off my tires in a ditch and then made it all of 5 feet before my chain fell off. Ok, derailleur hanger is bent, did some roadside surgery with my spare, got back on. Front-ish group I was in sight of is looooong gone. Rode another 5 feet, chain fell off front ring (1 by). Get off bike, put chain back on. Ride another 2 feet, chain falls off front ring. Put chain back on, pick up bike and spin the cranks, chain falls off. Swear at bike. Inspect chain, inspect chainring, swear at bike some more. Apologize to bicycle. Sit on the ground and contemplate life. Poke at chain hopefully. Pick up phone and call BFF mechanic friend. Explain that you are in a ditch somewhere in Kansas and your chain won’t stay on your front ring and you would really like to keep riding your bicycle. Confirm that you don’t have a bent link and you de-gunked your ring as much as possible. Hang up phone when some poor gentleman with a locked up bottom bracket walks by and sacrifices 2 of his water bottles in the name of meticulous chain cleaning, and ouila, chain stays on. Thank this gentleman profusely, offer him your first-born child, continue to ride bicycle about an hour after this all started.

It was less than 10 miles to the first drop bag stop after all that mess, and I was just happy to be rolling again. More good people awaited me in the town of Latham. Not only was there a pile of Magic Drop Bags, there was a whole tent with volunteers and pickles and granola bars and a water cooler and a HOSE. I restocked food and filled my Camelbak and bottles. I was preparing to roll out again when the guy who had apparently been leading the race rolled back in, which is never a good sign. He had a bent derailleur hanger and was having some shifting issues. As I was now feeling pretty handy I did offer to help him try to repair, but he was done. In true class-act form, he helped my clean off my bike once again and gave me his mud stick. I rolled off down the road and stopped a mile later when I realized Garmin had decided to stop doing turn-by-turn and there was too much mud on my glasses to see the purple line. I spent some time un-convincing myself that I was lost and carried on. This was now a solo venture, I wouldn’t see anyone again until mile 60-something. I stopped two more times during this section to hike-a-bike and clean my chain in order to keep rolling, and had a nice conversation with some friendly cows whilst doing so. 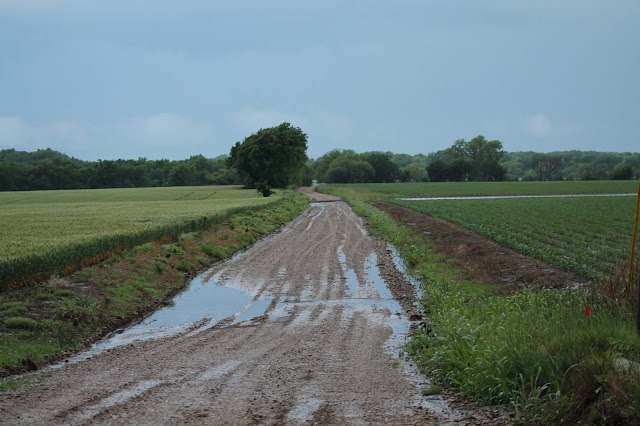 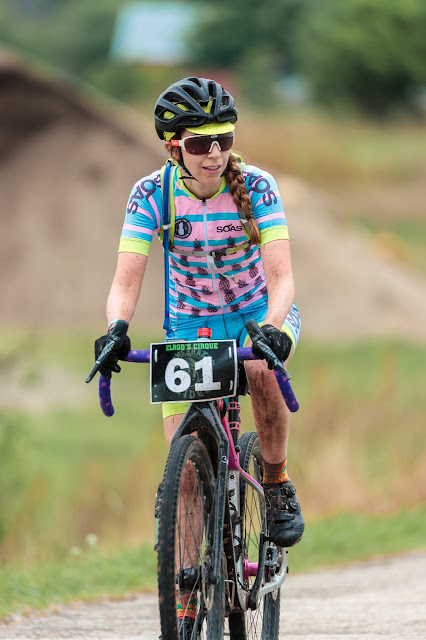 Around mile 60 I popped out on some pavement and rolled by a friend who had passed me (and been equally befuddled by the fight between my chainring and chain) during my first roadside repair sesh. I yelled some encouraging words which he claims to have not being able to hear at all over the wind. The skies were indeed darkening again. We rolled through some semblance of a town where there was a truck with two volunteers on a corner offering lifts back for those sagging in given another impending storm. I thought for about half a second about how that was probably the smart thing to do and then rode straight on towards the black clouds. I have a theory and it’s that I use up absolutely 100% of my brainpower at work and this is why I very happily do very dumb things on my bicycle literally all the time.

Well, watching lightning strikes and counting the number of seconds between the booms is one way to keep your mind occupied while riding a bike. Also rehashing everything you know about treating electrical injuries, and then trying to figure out the logistical difficulties of yourself being the patient. And then just looking at each ditch and barn and shed as you roll by in case there are other dumb people you can hide with if need be.

Fortunately the center of the storm stayed off the course, and lightning is actually quite pretty if you can forget about the small chance that it might also kill you. I made it to checkpoint 2 at mile 80 in approximately the amount of time that it normally takes me to ride a century plus, and rode in circles around town looking for the actual drop bag point before pulling out the cue sheets to figure it out. Garmin had pretty much given up on life by then, so it was time for cue sheets anyway. I eventually found some wet and tired yet still very helpful volunteers under a tent, filled bottles and ate some pickles for funsies, and received instructions on a re-route around an impassable water crossing. Those with insider knowledge of my innate navigational ability (or lack thereof) will consider it a near-miracle that I managed this re-route with neither written instructions nor a computerized navigational system.

Around mile 92, I was back on the original course. My bicycles was making a noise that was 50% like the Grim Reaper had taken hold of it and 50% like my drivetrain was held together by paperclips, so I walked a few hills that I was worried might stress my chain to the point of explosion. When I got within 7 miles of the end…^%&* it, as I figured if anything exploded at that point I could run my way in. When the gravel spat me back out on pavement I happily creaked the rest of the way to the finish line. Bobby Smith seemed concerned that we would hate him for sending us out into this long day of mud and mechanical hell, but I patiently explained that I am an insane person who enjoys struggle races much more than easy races. Also he gave me a pint glass and a sticker which is a good way to resolve all problems.

Thanks to what was a war of attrition (9 people finished the 104 mile race), an astonishingly long 104 mile time still landed me a nice bottle of wine and a chance to climb on some steps with fellow female badass Crystal Wintle, whose single speed crushed that mud. 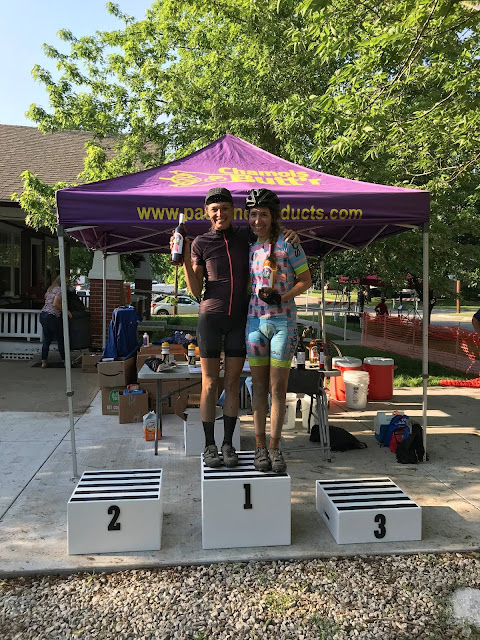 Posted by Adrienne Taren at 9:49 PM