Returning to Dirty Kanza as a veteran this year...yeah. Last year I was just focused on finishing and then putting my best foot forward. I had my bike prepped well in advance with carefully selected equipment and a plan. It all executed nearly flawlessly. This year I was just happy to have the day off work, wiped my bike down with a damp rag the day before, looked at my tires and shrugged my shoulders. After all, it's just riding a bike. When it comes down to it you just have to keep pedaling. Riding has always been therapy, and after a year of  constant circadian rhythm flips and generally getting my butt kicked every day at work for 14 hour stretches...riding is therapy. And gravel family is ever more important.

Mi madre came up again to run support crew, backed up by the District Bicycles hooligans who have gradually become my extended local bicycle family over the past year. She kindly shuttled my tired butt up to Emporia and into a hotel. I located the pickles in the car and acquired some hotel fruit, complete with inspiring DK-related messages. 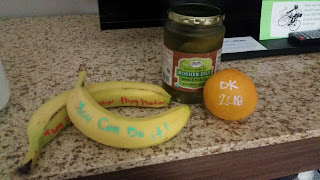 We awoke the next morning to a big storm. The wind was whipping every which way as we made out way back to downtown Emporia. Rain on the start line resulted in a 30 minute delay...rare in the gravel world. 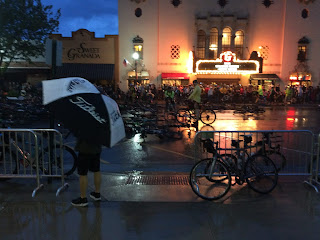 ...is flat(ish) and fast(ish). It was just slightly messy from the rain. There was some confusion around a detour. I just wanted to enjoy my ride today. I rode comfortably fast. Comfortably fast feels great. I stopped about 20 miles in to take off the rain jacket that I kept on at the start because I was a weenie. I was sweating bullets in it by this point thanks to the humidity. No bueno. Despite that it's all good at this point still, comfortably fast. All the interesting stuff comes later... 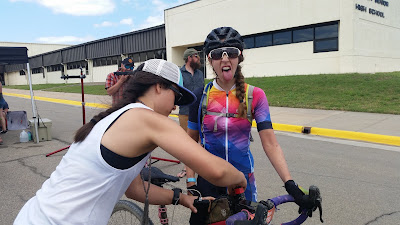 Leg 2 was again not bad. It was harder than leg 1 but I knew that from last year, and most of my brain cells were still functioning. Steady, not too fast. The wind is coming after this leg. I like the spread out parts of gravel races, and it takes DK a long time to spread out just due to sheer volume of riders. This was more my jam. The parts that stand out...the hills. Not so much the going up. The coming down. It was sketchier than I remember. Even on a drop bar mountain bike, it was super sketchy. I bottomed out at one point, lost some air in my back wheel but sealed. Held on for dear life while also trying to not hold on for dear life so my bike could do its thing, namely Stay Upright. There were apparently some bad wrecks, but they must have all been behind me.
Checkpoint 2: Minor downhill-induced bike maintenance. Food. Water. Out. 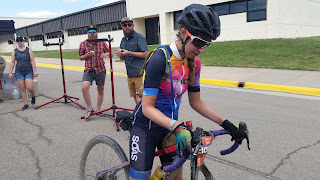 Gonna be honest, don't really remember what happened early on in leg 3. I think it was windy but doable still. The brain kicks in again around the low water crossing. Wading through the water felt so good. I pulled one guy on a fat bike who insisted I was riding way stronger than him. Whatever. Then I accumulated an XY chromosome train behind me for about 5 miles before shaming them into taking pulls in the wind. Seriously, are y'all going to let the 110lb woman pull all day?
I mostly remember the part where it got super windy, which wasn't that much later. It got super windy. And exposure-y. Low 90s, direct sun, 30mph headwind. Mucho struggle. Despite moving around 8mph, I passed a lot of people. A lot of those people were lying in ditches. Ditch napping or giving up or both. My stomach wanted nothing to do with heat or wind or drink mix. I dumped my drink mix and refilled with plain water when I passed a farmer camped out on his front lawn with a water spigot for riders. A familiar face with an Aussie accent whizzed by me, Jayson Mahoney (of gravelcyclist.com). He was feeling good and it boosted my spirits some, although I had no idea how he was moving that fast in the wind. A handful of miles later, I found him again, standing on the corner at a top of a hill, having a moment. We rode together for another handful of miles, during which I got pretty loopy and distracted myself by waving and making faces at his GoPro camera. Unfortunately loopy eventually turns to bonky. Death by wind and heat and a lack of any desire to eat.
It was not pretty coming into Checkpoint 3. I cried some dehydration and hypoglycemia and work-related secondary traumatic stress tears all at once, then demanded potato chips and peanut butter. Thank you to my friends for taking care of me and for gently pointing out when I was about to eat a piece of plastic wrapper, and other such ridiculous things.

I grumbled my way out of checkpoint 3. Grumbling is a good sign. You have to have life left to be grumbly. Even the word sounds like it takes energy. Grumble grumble grumble.
Not 3 miles down the road my headlight launched itself off of the handlebar mount and into the weeds on the side of the road. I can only assume this was in protest. I mean I hadn't even turned the damn thing on yet. I guess it had figured on not having to do any work today. Well, tough luck little headlight. I fished it out of a bush and reattached it. Grumble grumble.
It was actually ok riding. The kind of ok where you feel like you're on the verge of imminent destruction, but you know, not quite this minute. Maybe 30 minutes or so from now. We'll see. And anyways you may have had juuuust enough caffeine to be like NOT TODAY IMMINENT DESTRUCTION.
I still had my sunglasses on and I hit the last long minimum maintenance road just as the sun was in the right stage of going down to create and huge glare. I couldn't see jack squat as I bounced my way down this B road and contemplated whether or not I should get off and walk it for safety's sake. This is really something one should contemplate prior to it actually happening. It turns out that devoting some thought space to not being able to see the miniature boulders is relatively useless in the moment. I hit one at a bad angle and fell over into another one, which I did successfully see because I was lying on top of it. No major damage was done to either rider or bike. I walked the rest of it and watched the pretty glare-filled sunset.
A few of my leg 3 everything-hurts-and-I'm-dying friends caught me again after that. We discussed how everything still hurt and we were now dying just slightly less. With any semblance of time pressure off it was quite a pleasant experience. We hit the Salsa Chaise while there was still enough daylight for dramatic effect. I was pleased to see they'd added a lamp since my last chaise encounter during Land Run. I imagine the chaise gets lonely in between riders, and now it has a lamp friend. Brain level of functioning at this point: 3/10.
With about twenty miles to go it started to get dark for reals. Headlights went on reluctantly. We had a small pack of 6 or so riders. Less of a pack and more of a gaggle, maybe. The wind had died down some with the sun setting so there was less of an incentive to try and paceline. Plus gravel people don't really like to paceline to begin with. My brain needed its space to do its thing. I do remember saying "hey, we're flying now!" and then looking down and seeing 13mph. Just feels like flying after going 8 into the wind.
And then, the infamous train. We rolled up to the train tracks. A few ahead of us rolled out to take a detour.  Another 15 or so riders straggled in and piled up behind us. Flashing lights and whistles in the dark. People took pictures. People shared bacon. I split my Snickers bar three ways. It was so cool and I wanted to cry because this is what life is supposed to be like. Another 10 minutes and the rails went up. We went on our way.
Riders scattered again after the train break. 5 miles to go. I found a guy without a working headlight in the dark. My taillight was dead. I rode in front, he rode behind me. We chatted. This was going to be his 5th DK finish. I lit the way in.
It was a much longer DK than last year. Even given how crazy life has been in the last year, it was a much longer DK than I thought it would be. What I've missed in time in the saddle I've sort of made up for in pent-up emotional energy to release. But you can't control the day, the wind, the sun, or too many other things to count. Nor would I want to. Embracing the lack of control is part of the appeal. It's part of the therapy.
See you next year, DK.
Posted by Adrienne Taren at 3:09 PM