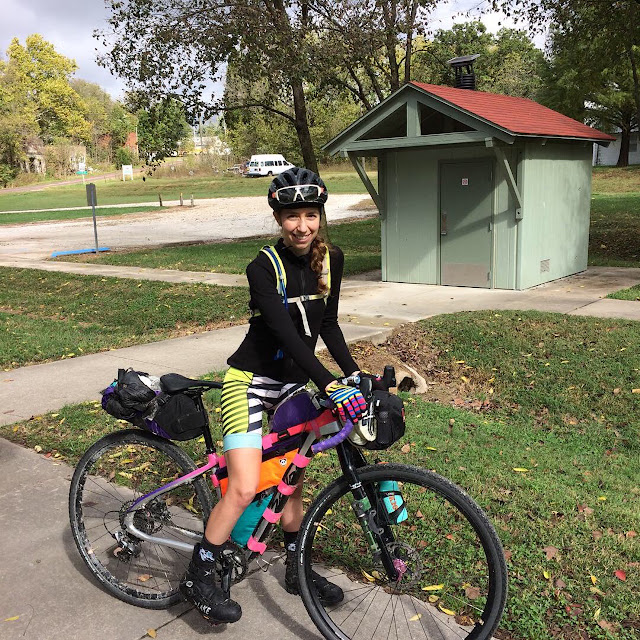 The ride: So. Picking up where we left off. Most things are dry-ish, except for my boots. It's more than livable, though. I set out around 0830, and ran into a Casey's for a coffee/Hershey's bar breakfast of champions about 9 miles in, and grab an extra few protein bars while I'm there. It's cool and misty outside, but the rain is done for the week.

The trail is once again quiet. Trees on either side, occasionally an interesting skyline, bridge, pasture. Scattered tiny towns along the way. I hit Sedalia, and there's a trail re-route on pavement for about 5 or 6 miles - navigating briefly is actually a welcome brake from the railtrail monotony, and it takes me past some pretty farmland (and a taco stand). A handful of miles later, I stop at the Clifton City trail head, where there's not much other than a restroom and map, and am stowing my jacket in my seat bag when two older gentlemen roll up from the westbound direction. One is from Maryland and the other Colorado, and they tell me they meet up once a year "somewhere in the middle" for a cycling trip together. They tell me about the Turner house in Tebbets, about 130 miles down the trail from where I've started, which is a hostel-style house open to riders. It sounds like as good a destination for the day as any, so that's now where I'm headed. 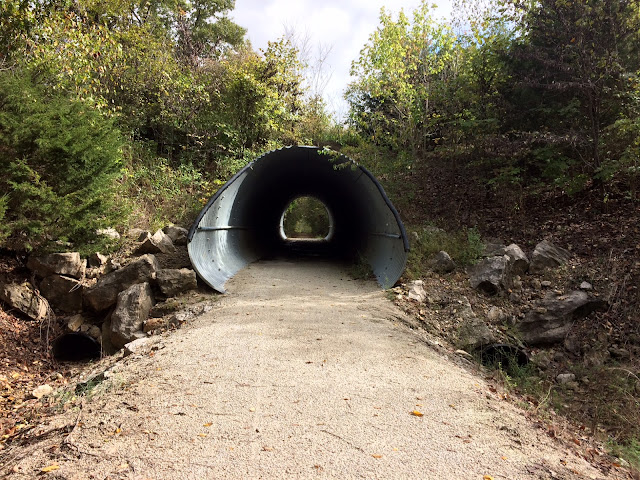 I hit Booneville 50 miles into the day, where I'm later told my two separate people there's a fantastic hotel called the Frederick. With jet tubs. Note to self.

Passing through Boonville, the trail winds through town and across a bridge, taking you to the Northern side of the Missouri River for the first time. Crossing the Missouri is kind of neat, but also windy. I was too busy blowing around on a loaded down bike on a bridge high above the river to take any actual pictures here, but shortly after the river crossing is the New Franklin to Rocheport stretch of trail, featuring plenty of big open fields and rock formations. 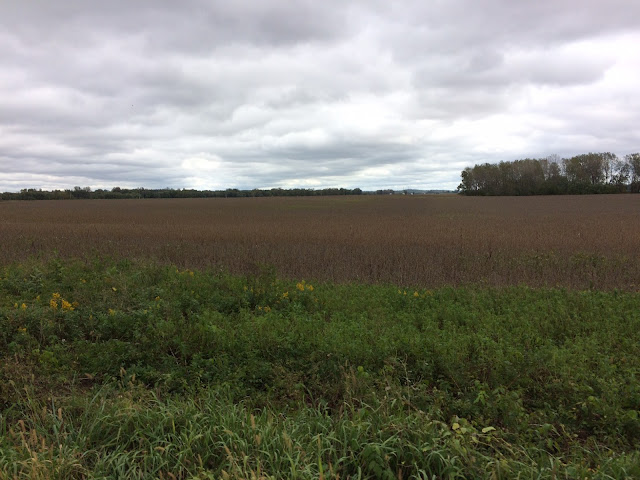 I keep expecting to see another Casey's or any sort of convenience store, and go off the trail to circle through Rocheport, where there are a few small cafes but not much in the way of resupply options. So on I go. The trail runs right along the Missouri River now, and the banks are near over-flowing, but the trail is surprisingly pretty dry.

Hartsburg is the next big dot on the trail map I've picked up. I've been warned there are no food options in Tebbets, so I stop there. Two B&B's, a single cafe/wine bar, no C stores, and everything else is closed. Many businesses along the Katy are seasonal and/or open limited hours, so if you're riding after 2pm and not during the summer, be prepared for not a lot. I gave up and blew some money on fancy shrimp tostados in Hartsburg, as they were only serving appetizers. They were super nice and made me hot coffee and let me plug my Garmin and phone in while I waited. It was a pretty little town, and the B&B's there looked like they'd be a nice stopover if one was touring the Katy trail. 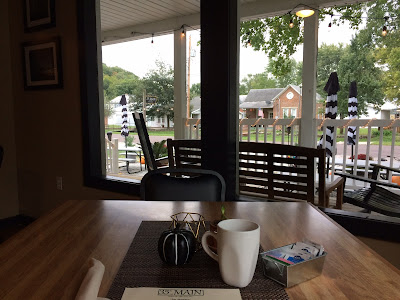 I left Hartsburg in the early evening with about 20 miles to Tebbets and a good hour of daylight left. There was only one other town in between, North Jefferson. As I pulled into the North Jefferson trail head, I noticed a couple I had passed earlier in the day. They turned out to be avid bikepacker/off-road rider-types from Alaska, en route to a wedding in St. Louis. We admired each other's color-explosion gravel bikes, and rode the last 12 miles to Turner trail shelter together.

It was dark when we arrived at the Turner trail shelter, and dark again when I left the next morning, so thanks to Google maps for this shot: 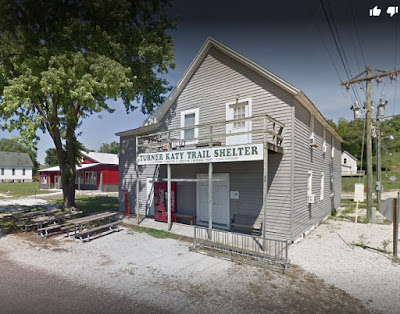 All the necessities can be found here: restroom, coffee maker, handful of bunks, plenty of space to haul your bike and camping gear in, heat/AC. It was a nice place to crash for the night and interact with a handful of other cyclists from all over the country. I was more than happy to pay $6 for a warm place to curl up for the night.

Next up: Bikepacking the Katy Trail, Day 3...
Posted by Adrienne Taren at 9:43 AM