Things I ate: Kind bar, handful of gummi bears, one Justin's PB packet, Casey's coffee/hot chocolate x2, Snickers peanut butter crispers x2, Clif nut butter bars x2, Nature Valley granola x1, one bag of potato chips, one bag of beef jerky, and whatever else I found in my car that appeared to be remotely edible on the way home.

The ride: So, I made the questionable decision to ride all 170 miles back to my starting point on day 3. Partly out of masochism, partly because it was supposed to storm again the following day. I crawled out of my sleeping bag inside the Turner trail shelter at 0500 and had the bike packed up and out the door by 5:30. It was dark and quiet. And cold, in the high 30s. I bumped slowly down the trail in the dark into a bit of a headwind. The sun started to come up after an hour, and pace and spirits both picked up some. I was relying on one granola bar and the rest of my emergency gummy bear supply to get through the first 80 miles, where there would be a C-store off-route in New Franklin. There may not have been any open cafes or coffee shops in any of the towns en route until that point, but several of the trail head restrooms were heated, and I *may* have dragged my bike inside with me a couple times in the early morning hours to add/remove clothing layers and defrost my fingers. 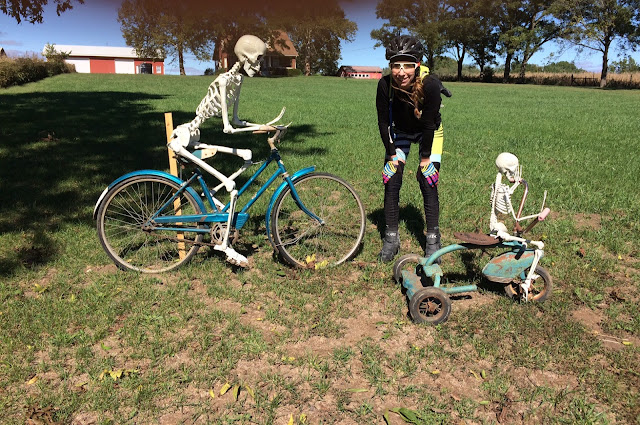 In New Franklin, I turned right off the trailhead onto a road that looked like it led into town, straight up a hill. At the top of that hill was the promised red land of a Casey's General Store, where the people again looked at me like I was crazy. Totally out of calories by this point, I grabbed 2 bags of potato chips (one of which was consumed on the spot), 2 chocolate bars, and a handful of Clif bars. Also coffee. All the hot coffee. It was 11am, later than I wanted after a bunch of stops along the way to pack away clothing layers (it was high 40s and sunny now). But with under 100 miles to go, and now fueled by chips, chocolate, and caffeine, legs felt ready for the rest of the haul home.

After New Franklin I crossed the Missouri River back into Boonville, and continued along the trail. Somewhere along this section I passed these Halloween-themed cycling skeletons (above), where a few folks headed in the opposite direction had stopped to take pictures. Couldn't pass up the opportunity, and three very kind French touring cyclists snapped a photo for me and then insisted we take a group photo as well 😄

I stopped to photograph a few of the bridges and tunnels (of which there were many) that I had passed over and through while East-bound the day prior. Boonville to Green Ridge passed uneventfully, just pedaling and ticking off miles. Gradual up, gradual down, no real hills but no coasting either, just constant steady work. In Green Ridge, 10 miles from Windsor (from where I had started the previous day), I veered off for my second and last C-store stop. Hot chocolate/coffee and some emergency chocolate for the road. Quick mental calculation that I would have 1-2 hours of riding in the dark.
When I got back on the bike after the Green Ridge Casey's, my left knee complained. I told it to shut up. That was relatively ineffective. I rarely get left knee problems, and think it was likely because of cleat placement on my winter boots. Kinda just threw those cleats on without as much meticulous measuring as usually goes into cleats. Note to self, don't do that.

I was making forward progress and eating chocolate, though, so couldn't complain too much. It eventually settled down to a tolerable level. In Windsor, I stopped and made sure that I was turning back onto the Rock Island Spur trail in the *right* direction this time. It was around 5pm and I calculated 50 miles to go. A few towns and, per my memory of 2 days ago, a lot of nothing along the way. It was nice to see this section of trail not in the pouring rain this go-round, even though it was much the same as the rest of the Katy trail 😂

The sun started to set. It was fine. I needed my light (borrowed battery pack-powered headlight from a friend, with the Dynamo in the shop still) earlier than anticipated, with the trees creating a trail-canopy making it darker than if I had been out on a normal open road. Trail things go bump in the night, although the only thing I ever actually caught sight of was a small family of raccoons.

10 miles to go. Headlight dies. Stop and pull out backup, a trusty amazon.com purchase that puts out about 150 lumens but lasts forever. The temp had dropped again with the sun firmly down, and I stopped to put a jacket on. A few more mile markers and I was rolling out into a parking lot in Pleasant Hills, MO. Somewhere within a few miles is my car. I didn't trust myself to navigate there from memory at this point, and finding myself back in the land of Verizon reception, let the iPhone take me there.

I capped off my journey appropriately by bumping over the railroad tracks and catapulting said iPhone from my top tube bag, and then tipping over on my bike while retrieving it. All not 100 feet from the car.