A random weekend off in mid-November led to my third trip back to 4R Ranch & Vineyards in Muenster, Texas (the first for Red River Riot in 2017, and the second time for the 2017 edition of Roadrunner Rocks). If you ever find yourself in Texas Hill Country, this place is a must-stop. The drive in takes you through the town of Muenster, past which windmills start to dot the landscape and gravel roads abound. Seated at the top of some of that hard-pack, fast-rolling gravel is a barn housing the 4R Winery tasting room, from which Spinistry's annual fall ride and race starts.

The morning was chilly with temps in the 40s, but sunny skies soon warmed us up. The boy and I both rode the 70 mile course...a nice walk (roll?) in the park with events like 24 Hours of Cumming (me), Spotted Horse Ultra (me), and the Race Across Texas (him) under our belts in the past several months. The "off-season" has been filled with work & teaching (as always, while I count down the last year and a half of residency), so it was nice to be back riding outside for the day.
Like we've come to expect from Spinistry events, the setup & organization were impeccable, while retaining a no-frills GTFO-and-ride-your-bike gravel . As gravel continues to grow and attract those who want "swag", pros, and $$, it's nice to see Spinistry retain some middle ground between excess & grassroot minimalism.

Camping was available free with registration the night before and after - work didn't allow for that this year, but I can attest that there's great on-site camping! And the showers now have hot water 😂 No polar bear club this year!

Lauf Bikes were also available to demo (and ride for the entire race, if you wished). None small enough for me, but I heard nothing but rave reviews, and I got smoked by at least one person on a Lauf.
As for the actual ride: the start and finish of every race I've done out of 4R Ranch is the same. I have a love/hate relationship with it, and at least you always know what you're in for. Heading out is doubletrack-ish, often with a bunch of loose chunky stuff, made trickier by navigating between and around riders of different speeds. Entering the ranch? Up a steep, winding hill. But at least that's the only thing standing in between you and wine and barbecue by that point. 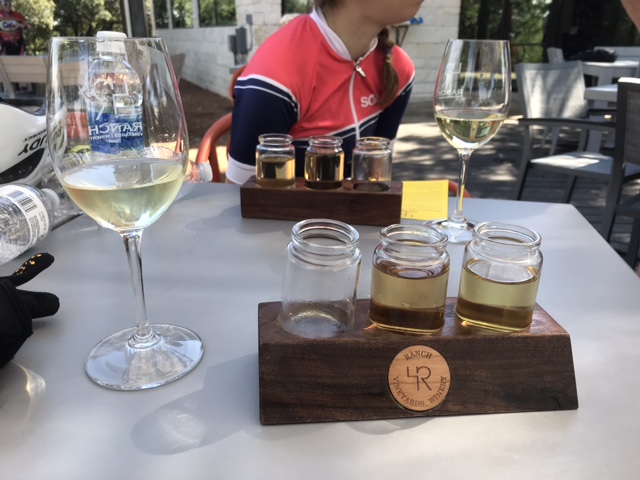 The always-appreciated wine flight at the end. I took home another bottle of Gravel Grinder Wine, too!

Posted by Adrienne Taren at 7:04 AM