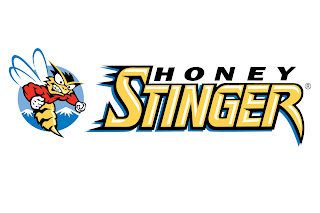 Hey folks! I'm happy to be able to say that I'll be representing Honey Stinger as a Hive Elite athlete this year. Their support & products will be put to good use at events like Iowa Wind & Rock, Dirty Kanza, Land Run, and Wilderman this year. In a moment of downtime working ICU nights right now, I calculated that I'll burn about 560,000 calories at the events I have on my schedule currently, and not all of those calories can be replaced by gummi bears and hot chocolate from Casey's (also diabetes is bad.) 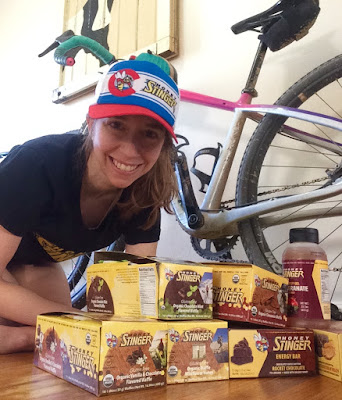 I've been using Honey Stinger waffles for a few years now - for athletes with Celiac, gluten-free stroopwafels are a lifesaver. They taste good, go down easy, and have a decent mix of simple and complex carbs. Organic, simple ingredients compared to most other nutrition products. Fair warning, they do freeze at temperatures below 25 F (thanks, Trans Iowa 2018!). If I'm out in those temps, waffles now go in my pockets or down the front of my bike jersey. Problem solved. And there's a large box of waffles and honey-based gel coming my way to help me get ready for the upcoming ultra season. 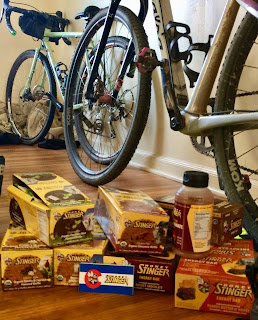 From the promoters: "We set out to create the ultimate early season multi-strada event and we ended up with the Oklahoma Gravel Growler.  This is a two day festival celebrating getting outside, trying something fun with cool people and conquering old man winter! We have two courses laid out … short course which is 35’ish miles and the long course which comes in around 83. New this year, we have added an ultra-marathon so that the runners out there can join in on the adventure. "

Early February can indeed be a sketchy time for weather in Oklahoma, but the new Oklahoma Gravel Growler website looked super fun, and also I know [race director] Craig since he hangs out at City Cycles Oklahoma sometimes, which is the place I spend the second-most time after work, the third-most being my actual home. Work was kind to me on February 2nd of this year, so I had no excuses not to show up to this race. I also volun-told my little* brother (definition: telling someone they are volunteering), who was in town from NYC. What better way to spend time with family you haven't seen in a few years than to abandon them on the side of a dirt road in Central Oklahoma with a safety vest and a few bananas?**
*not so little anymore. Actually, much bigger than me.
**For the record he "wanted to see what this gravel thing you do is all about"

Oklahoma Gravel Growler has grown, but in a good way. There were some big name sponsors on board, yes, but they were mostly chilling around and raffling off free stuff for all participants at the Friday night pre-race gathering outside Spokelahoma in tiny Shawnee downtown. Alison Tetrick herself was on hand to pull names for the raffle, and I have a whole new level of respect for her after her multiple mid-raffle requests for whiskey and a hot dog. Some lucky dude won a Lauf fork, but I'm still pretty pleased with the Shimano scarf that one of the Shimano reps was very excited to gift me. Seriously, it's a very nice baby blue color that brings out my eyes. I have visions of riding my bike with it streaming behind me. I believe they told me it was aero. Also saves several grams over wearing a Sram scarf.

Anyhow, there was much general goofing-off and raffling of things and admiring of the MSR giant tent that was set up and being dissuaded by The Boy and also The Brother of climbing in the demo tent on the side of the road in the dark.

I could ramble on about how the roads were primo (they were, with a mix of all surfaces), the course directions and markings were spot-on (thanks Craig & co), there was just the right level of support (drop bag service at a volunteer fire station half way, with donuts and several bemused firemen twice the size of me), and how the headwind in the second half was terrible even for a die-hard fan of type 2 fun (it was), but...

But I stupidly asked said younger brother to write me a few paragraphs on his experience as a volunteer and new observer of our gravel culture. He inherited the funny gene too, and after 30 years of trying, may have (temporarily) out-funnied me while also providing a very insightful commentary from his vantage point of highway-crossing-usher. Below is guest commentary by Bennett Taren:

"I double-checked the time as the three race leaders crested the hill, an eighth of a mile away from where I was supposed to help them not get killed on the highway. They were surprisingly early. I'd entered the weekend curious about gravel racing's cultural balance between athleticism and whiskey, and it was at this moment, with great relief, that I realized the scale tipped somewhat definitively away from functional alcoholism. Silently removing one danger from the ever-growing list of gravel racing things that might kill my sister, I heroically unsheathed the loaner/bootleg caution flag I'd been provided to combat the next threat.

An hour of furiously waving at speeding cars to slow down passed. I basked in the spiritual thanks pouring in from all the other rider's siblings for providing their loved ones safe passage across the sporadically busy road. The weather was nice and a peaceful calm settled over the long breaks in traffic. A horse who lived in the neighborhood came over and pooped. The animalistic part of me that was awakening in the Oklahoma countryside yearned to tinkle on an adjacent bush in solidarity, but ultimately my human responsibilities took precedent. Later I proudly peed in a urinal, like a person.

Eventually Adrienne showed up, yelling "I'm doing terrible", despite the 70 miles of riding she'd already endured. Not looking to rub my tranquility in her face, I toned down the showy flag-waving I'd been working on and ushered her calmly across the highway. She disappeared back into the race, which went off without a hitch and was a fun family-inclusive event, thanks to head organizer Craig, many lovely volunteers, and new friend/highway crossing all-star Dane, who was the real reason riders stayed safe. Host town Shawnee was very accommodating and provided a variety of entertainment and post-race food to all involved, including the plain potato my sister gleefully chose as her recovery meal after finishing. While swapping race experiences with other participants, she soberly munched on the potato sans utensils, taking bites as if it were the reward apple my pooping horse friend had been gifted earlier.

The next day I returned home to New York City. Entering my small apartment, the cheap folding bike I'd once been gifted greeted me from its usual corner. We shared a look, ultimately a mixture of shame and relief at what we do not put each other through. Breaking the silence I poured us some whiskey, unearned. 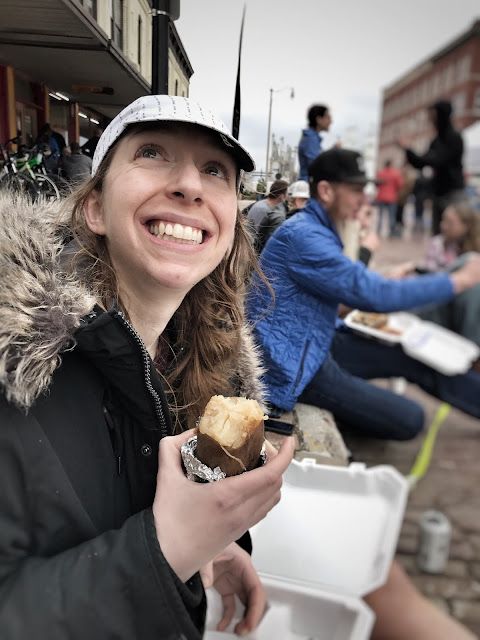 Above, I am pictured with the now infamous potato. Many people found it entertaining that I wanted to just sit and eat a whole potato (direct quote: "I've never seen someone so happy while eating a potato.") When you've ridden the last 40 of 83 miles straight into the wind (and maybe are just slightly out of shape from a bout of flu and life in general), let me tell you, you get to do whatever you want. I may bring some sea salt with me next year.

If you want to ride something in Oklahoma that's the perfect mixture of low-key and high-quality, I can't recommend this ride enough. It was a fun, refreshing, early-season butt kicking (punctuated by miniature donkeys along the way.) There were many other fine points of the day that just gave it that extra character...adult beverage stop at mile 8 on the way out/back, the RD in a kilt at the finish line, tiny flat repair kits from Lezyne as finisher tokens, live music & food other than potatoes, free movie ticket for family & friends to see The Goonies at the local movie theater while you were out riding your bike, etc. Check them out here and here for more information and to stay posted for next year's event.

Posted by Adrienne Taren at 1:01 PM No comments:

There has been much ado as of late as to the state of cycling in the US and the gravel racing boom - from expansion of events - particularly those including prize money and "swag"- to pros from road coming over to race on the dirt. Along with this has come concern about the "death" of grassroots gravel. Much has already been said on this topic (I'd direct you to Guitar Ted's excellent series "The State of Gravel"). I've griped on this topic recently as well, and it's forced me to think more carefully about what I want in the events I go to, and I will be making more mindful choices this year. In the end, it's about making connections with people and nature and hitting internal goals for this rider. I tend to agree with G.Ted - the grassroots spirit at these events and in this community is very much alive, you just have to take yourself to the right places.

One of these places was Curto Dirto in Stillwater, Oklahoma this past weekend. Curt "Curto" Dikes is a former employee of District Bicycles in Stillwater, now living in OKC, who was suddenly diagnosed with brain cancer in December (full story here). The Stillwater gravel community immediately rallied around him to organize a 50 mile benefit ride that ended up attracting more than 200 riders and raising an amazing $68,000 dollars through registrations and an enormous raffle with items donated by Moots, Salsa, Cedaero, Chris King, and dozens more local businesses and individuals.

There may have been a few riders hammering out front as we rolled out of town and onto the gravel, but mostly there was a sense in the air that this was a time to spend with others. We chose to ride with friends, drifting forward and backward and in and out of conversations and reflections on the day, and to take the time to appreciate our bodies that let us pedal up and down the rolling red dirt roads that Stillwater is famous for.

There were several supported stops, and an oasis with a margarita machine and a fire pit, of course. This pup also found his own personal rolling support.
So yes, the community - any many would say family - that has kept many people in gravel and continues to draw many more in is alive and well. It may be buried a little more than it used to be under advertisements, hype, and dollar signs. And that's fine, that's how business and industry works. But if friends and strangers can come from across the country to raise $68k for a good dude dealt some bad cards, then the gravel you know and love is not going anywhere - you just have to look in the right places.
Posted by Adrienne Taren at 12:46 PM No comments: