So, the downside to sleeping on the other side of a creek is if you wake up and it's freezing cold, the first thing you have to do is put your still wet (and now cold) kit on and walk through that creek. Which felt really good when it was in the 80s yesterday early evening, but real cold when it's in the 40s in the early morning. So I pulled a Jay P and wore my Enlightened Equipment Quilt like a cape-dress until I was pedaling and warmed up, which happens pretty quickly when you have a mile-long climb half a mile into your ride. 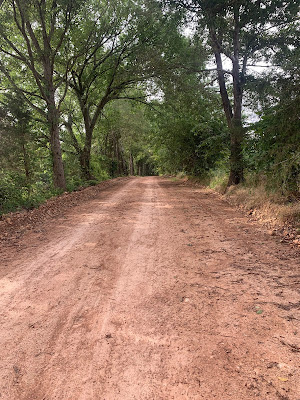 I soon found myself in the small town of Marble and pulled into the King's Country General Store for resupply/second breakfast. I got a lot of funny looks walking in, but it was a great fully stocked convenience store, and some of the funny looks struck up a conversation. A group of older gentleman having their breakfast mostly wanted to know what the heck a neon-colored young lady in a helmet
was doing eating two bags of potato chips and drinking a 20oz coffee at 9am in Marble, Arkansas. They were quite pleasant and genuinely interested in where I had been and where my route would take me.

I left Marble in a warm and fed state and was quickly back onto gravel, where within 5 miles my bouncing-down-the-ruts-and-ledges luck ran out and I finally pinch flatted my front tire. It eventually sealed with a plug, but I suspect there was a slow leak somewhere as it really, really did not want to hold air. I probably got about 20 PSI to hold and kept on rolling until I hit the tiny Kingston C-store, where I spent some quality time sitting in the parking lot with my mini pump before giving up and getting some water and chocolate. (Note: there's also a small cafe in Kingston, but it was closed when I rolled through.)
Another stint on winding low-traffic pavement out of Kingston, and I was into the meat of the day. Long open gravel roads through and around remote areas, dotted by the occasional church, house, or trailer. I stopped at a church to look for water but was SOL. Took a nice little picture though. 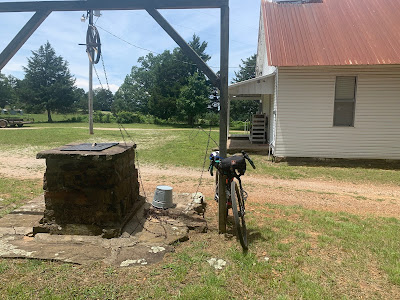 I crossed a small stream somewhere around here and did a double take - a long piece of metal pipe was suspended over it, with rainwater running out of the pipe to feed the stream. There was also a Gu chews wrapper on the ground...#RebeccaRuschwashere?

Just as I was about to pop out onto a highway, and about to run dry, I pulled over into an old schoolyard, where I filled up my bottles and Camelbak and chugged an extra bottle for good measure.
After a handful of relatively scenic highway pavement - dotted by as many touring motorcyclists as cars - I took a sharp right back onto the dirt, and began the long muggy climb up through the Ozark National Forest. It was worth it for the descent. Unlike the morning and previous day's bumpy technical descents, I was treated to smooth, fast, dirt through a long series of switchbacks surrounded by tall pine trees. No pictures because I was too busy hitting near 40mph...this is where it would be good to have a GoPro :)

You know those days where you suffer, and suffer, and flat, and run dry, and etc, and then you hit all the breathtaking and warm and fuzzy things that make it all have meaning? That was the National Forest descent, and the Oark General Store that is literally at the bottom of it (ok, like a block down the street you end up on.) This is a must-stop. If it's not open when you get there, sleep on the steps until it opens. It is full of pie and ice cream and breakfast and candy and homemade jam. I ate a very large bowl of mint chip while looking at the map and trying to figure out where to end up for the night. Note that there's NO cell reception down in the valleys. Yes, you will have better reception up high in the wilderness than you will in an actual town at the bottom.

Fueled by ice cream, I hit the pavement again along the National Scenic Byway, with cliffs and trees to one side and the Mulberry River Valley to the other. Just 12 miles down the road I started to see campgrounds, and after some internal debate, pulled off into one. It was only 5pm, and even though I'd been on/off the bike since 7am, I had some legs left and a bunch of hours of daylight. The next major campground was at the top of the long, long climb up White Rock Mountain. I figured I could make it there...but I didn't need to. This trip was about wandering and adventuring, and I wanted to be next to the river (this would turn out to be a very, very good decision.) I plopped my bike under an awning overlooking the water, set up the bivy, and wandered down to stick my legs in the clear blue water.

I don't remember what was in my head at the time but I wrote down "suffering is salvation."

Next up: Day 3, Mulberry River Valley back to Bentonville. In which I see a bear, crash, and make new friends.

Posted by Adrienne Taren at 5:54 PM