I woke up at 5am to the sound of rain pattering on the awning I was under (good decision #1.) I laid there staring at the green nylon "ceiling" of my bivy for another 20 minutes and peeled myself out of my sarcophagus shelter as the thunder died down. Shoving my sleep system into my seat pack for the last time and donning my Goretex rain jacket, I pedaled out of the campground and back onto the Byway and saw...another cyclist.

After 2 days and 150 miles, I'd yet to encounter another person riding. I'd settled into a comfortable headspace of being alone. I'd quieted my mind for the first time in a long time.

So I said hi. Exchanged brief stories, pleasantries. He was a rider in the full Arkansas High Country race, which had started about 5 days ago. I'd wondered if I'd encounter any of those handful of riders along the way, but it hadn't happened yet, since they'd departed from Little Rock and were scattered across the southern and northwest portions by now. After a couple minutes I let him pedal away from me, content to warm up at my own pace and have another day of solitude.


I rolled through the "town" of Cass after just a few miles - not much there to see - and finally made a sharp right off the pavement and onto gravel. Straight. Up. Hill. This was it, the beginning of the second ginormous climbing section on the elevation profile I had glanced at. I pedaled uphill in my smallest gear and just kept spinning. I kept expecting to see the White Rock Mountain camping area that I had contemplated trying to make it to the previous evening...30 minutes of uphill passed, then 40 minutes...it flattened out into one screaming descent, and then I went back uphill...again and again. What started as pea gravel became a rock garden, thanks to the recent storms and floods. Rowdy enough that resurfacing trucks were out and about. I passed the cyclist from earlier again and didn't see him for another hour or so. As I was flying down a shorter descent, there was a black-brown lump in the distance. I feathered my brakes while trying to figure out what the heck it was, before my brain put together local warnings about bears. Yep! He (she?) started to move off the trail, and then I came to a stop probably 20 yards away, and the bear also came to a stop. We had a staring contest from a safe distance for a good 5 minutes or so. Upon hearing the whir of another bicycle coming from behind me, I decided the logical thing to do was to wave my arms at said cyclist and yell "BEAR." The bear then ran away. I took this picture of him. 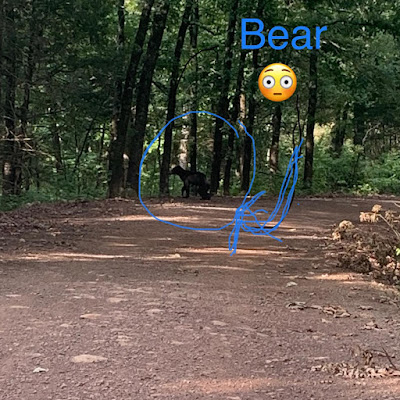 I should mention that this other new cyclist friend of mine was a native Arkansonian and slightly more educated about bears than I am. I know to stay away from baby bears because mama bear is nearby. I learned that this particular bear that was in my path was approximately a 1 year old bear, and mama bear is long gone. I'm studying up on bears before my next bear-territory adventure.

Anyway, we continued on, and I spun away again uphill. At the top-ish (although it felt like I'd reached multiple tops by now) I finally found a sign for the White Rock Mountain Cabins, where there was also supposedly a small store for resupply. Turns out the catch is that you have to ride another mile uphill to get to it. Totally worth it for some hot coffee and candy bars though. I had a nice chat with the gentleman manning the place, mostly about bears, and he let me fill my water bottles up.

I proceeded to happily bomb down the hill from that store, bottom out on a giant rut, and cut my sidewall. A lot of bad words were said. I stuck a Dynaplug in but it kept leaking air. Whilst tearing apart my frame bag looking for my spare tube, my friend from earlier rolled up. He was happy to lend me a tube as he'd had five flats yesterday alone. He was also nice enough to take a break to help peal my tire off the rim, as I was about ready to chuck it off the mountain altogether. I also took advantage of his much-bigger mini pump and aired way up, as the major tire problems I'd had (and was apparently the same for the AHCR racers) were pinch flats on the ruts.

To get all the way through the White Rock Mountain climbing ended up taking 3 hours for 20 miles. It was pretty, and challenging, and remote, but I was really glad when I finally popped back out onto a regular old gravel road. Stopped at an old abandoned church and found a water spiggot before heading out onto another stretch of paved miles. I back-tracked a bit here as my Garmin lost signals, as it had several times before, and I thought I was off-route. It's a funny fact about NW Arkansas that you have better reception on the remote mountain tops than you do in the valleys where there are actual towns.

It was back to smooth sailing and endless consumption of trail butter until another gnarly, rutted descent with oodles of large loose rocks, that took a sharp turn left at an 18% downhill grade, where I bounced into a rut and slid out. Crap. All told I was pretty lucky, I tore one strap off my frame bag and some skin off my elbows, and my left quad took most of the blow. A pickup truck was cruising uphill at about 10mph (it was that steep) and two older gentleman and one weiner dog poked their heads out to see if I was ok. They ended up throwing me in the back of the truck and giving me a ride the rest of the way down the hill while I pieced myself back together. Incredibly nice people out there.

Riding with an evolving quad hematoma is no fun. If you've crashed a bike, you've probably experienced this. I was 40 miles from my starting point, however, and had no one to come get me, and also just wanted to finish the damn thing. 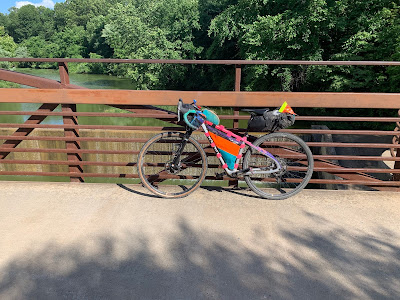 Fortunately, pretty much all of the hills were behind me, so soft pedaling on one gimpy leg was enough to get me home. In short order I was actually back on pavement and riding toward Fayetteville. The route takes you right into town and onto the Razorback Regional Greenway, a paved trail connecting Fayetteville and Bentonville. I wish I had stopped to take more trail pictures - there were some pretty sights along the way, rivers and lakes, and several signs welcoming cyclists to stop at local businesses for water. It's evident how much work Fayetteville, Bentonville, and the towns in between have put into becoming cyclist friendly. 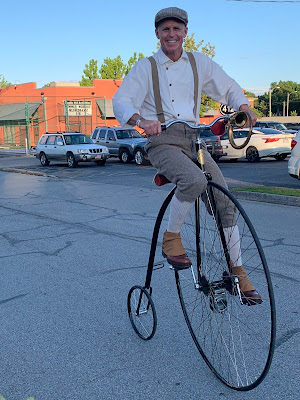 I spun off the Greenway and back into Bentonville in the early evening, just in time to catch a lot of local cycling groups heading out on rides, and this dude on a penny farthing who made my day and let me take his picture.

250 miles done, 20,000 feet of climbing - almost half of it on day 3 - 2 days and 7 hours. I regret that crash, it would've made finishing a slightly happier experience, but I wouldn't trade any of the things I saw and did and explored on this trip for it. Definitely planning on going back to ride the other short High Country Route loops, and hopefully the full 1100 miles when life eventually permits :)

Posted by Adrienne Taren at 7:36 PM