My Delta Epic story starts in July, when I found myself in a black hole. I eventually tried to claw my way out of said black hole by putting my name on the start list of another ultra. Fight darkness with fire. Or something like that. Here comes the first confession: I had it in my head for the longest time that this race was in Missouri. It's in Mississippi. One is further south and a lot hotter. Two and a half years in Oklahoma and I still can't do midwest geography.

Anyway. I wanted to see new things. I wanted to win the mental game. I wanted to meet up with one of my favorite people who now lives outside of Memphis and was abnormally excited about driving to random rural locations in Mississippi in case I needed to be rescued. I was out of July's mental black hole but a little more into a physical one, as has become the new normal. I may be counting down the 9 months until what will amount to 11 years of post-graduate training is over.

And so I came to find myself at a midnight start under a full moon at Arkabutla Lake, Mississippi, with a loaded down Cutthroat. Because all I remembered of the reading I'd done on this race a few months ago was that resupplies were very limited, there wasn't much elevation, there were levees, and it was probably going to be hot and buggy.

All of those things were true. And none of them sound like a terribly big deal, but Delta Epic is a deceptively hard race.

1. If it sounds like a dumb idea to come off a night shift, sleep 5 hours, drive 7 hours, and promptly start an ultra - it is.

I may have developed a reputation as a person who tends to excel at dumb things, but honestly, the above pre-event strategy is not one I can recommend. Both from a performance standpoint and more importantly, a general health standpoint. 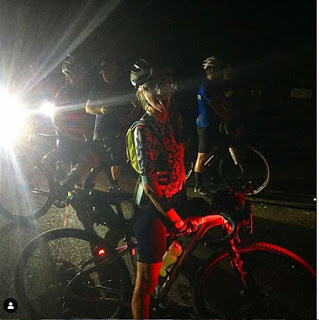 2. Flat does not equal easy.


Flat means that you're pedaling 100% of the time, which is hard if it's through sand and loose stuff. Also that you're in the exact same position, and that starts to hurt.

They galloped in front of me for a little while. I did not hit them. I may have hit one or two cow patties. Oops.

4. Mississippi cows are very large and sturdy-appearing. (see above)

5. I thought Oklahoma gravel was rural, then I met Mississippi.

6. You can sit on the floor of a Walmart drinking chicken broth while covered in dirt, and no one will bother you.

Heat exhaustion was getting me. Bad. This was the closest thing to out-of-hospital resuscitation that there was. Yes, I've been checking to make sure I did not end up on People of Walmart.

7. Hoisting a 30 lb bike up a ditch onto a closed bridge sixteen hours in when it's 103 degrees is unnecessarily hard.

8. Hitting a rut may save you from falling in a ditch.

There was a fun B road section that we did in the dark. Jason claims this is a road but it's really an overgrown field with shrubbery taller than me. So tall that I couldn't even tell I was riding in a rut and tried to make a lateral move, and then went kerthunk on the ground. However, I was appropriately suspicious hence forward of the terrain and thus actually noticed the large ditch that appeared shortly thereafter, stopped and carried through it. From several much larger thunks I heard behind me, many people fell in the ditch.

Thank god for the above-mentioned Walmart. My dynamo headlight mount on my fork detached itself and then wouldn't screw back on (inopportune time to figure out something's stripped). I had to stop and re-tape it to my bike 3 times the second night BUT I could see. Gorilla tape fixes everything.

10. Mississippi bugs don't give a damn what bug spray you put on, or how many times you re-applied it, or if you have socks on.

Seriously. My worst bites are on my ankles, through my socks.

11. Give your chauffeur a change of clothes.

Or be prepared to get sprayed down by a fire hose outside the Bentonia police station before you're allowed to get in the car at 3:18am.

I wanted to quit outside of Indianola when I felt sick and was going into a headwind and it was 103 degrees with a heat index of who knows what. I almost quit in the Delta National Forest when caloric-deficiency-induced-crying paralleled 15 miles worth of downed trees and mud pits and general forest detritus. And then, for some reason, I just got mad. And you can make it surprisingly far fueled on rage alone. And by the time the random bout of anger at the world wore off, I was close enough to slog it in, and there were finally some hills. Who would've thought I'd find climbing and descending to be a nice break at mile 280ish. 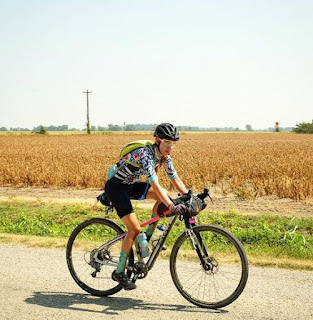 I usually don't go into things with specific goals. It's not good for my mental state. I let myself have loose targets and then see what happens. I had a loose pre-race estimate of 24 hours, which was what my moving time ended up being. Accounting for resuscitation-by-chicken-broth time in Indianola, mechanical fixing time, and crying-bonking in the Delta National Forest time, I rolled into Bentonia at 3:18am on Sunday -  27 hours and 18 minutes total, 293 miles (well, 295 including my wrong turns.) 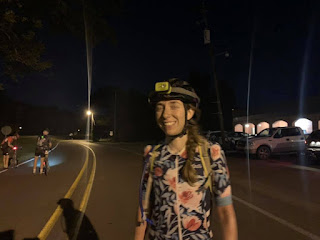 I set the new women's solo course record (previously 31 hours.) I'm working on being proud about this. Most people wouldn't guess that I have a smidge of impostor syndrome when it comes to cycling. I have a tendency to discount what I did. There's also a very tricky balance in this community between being too performance-oriented and...not. I may not have ridden as "fast" as I could've under ideal circumstances, but I did a hard thing on a very hard day.  Just because you couldn't ride balls-out straight through 293 miles (295 after a couple, um, detours) on an absurdly hot and exposed course doesn't mean that you get to discount your 27 hour record.

Now that I'm much less grumpy than I was at the finish, I owe Jason & Wendi Shearer of Ordinary Epics a big thanks for all the effort they put into this event, and Jake Drevs a huge debt of gratitude for spraying me down with a fire hose and packing me into his car at the finish.

What I Ate (because everyone always asks this question):

Posted by Adrienne Taren at 7:26 PM