Me, I have been going to work as much as/more than ever [healthcare etc etc], but that doesn't mean that I haven't also bought several houseplants, named them, and had conversations with them. I forgot some of their names, and now I just call them all Harry. But I digress.

I thought about writing a detailed description about how a packet of trail butter, once opened, can be conveniently squeezed up under a mask directly into your mouth with just two thoroughly hand-sanitized fingers. Unfortunately this is where much of my race fuel consumption has taken place in the past 6 months. Minus some bike rides. The running trails have been mostly on hold since an unfortunate picture frame vs big toe incident. But that's another story.

Pandemic life coincided with full-time cohabitation with another endurance athlete, and after we both finally gave up on blaming the dogs for the rapid disappearance of food from the house, some, um, creative eating patterns emerged.

Nut butter for dessert when the ice cream disappeared (the dogs ate it, I'm sure.) 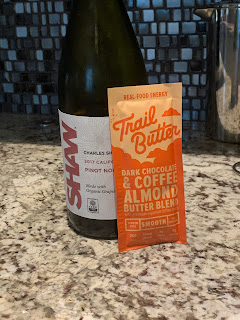 While dark chocolate-coffee can easily stand on its own, the one thing that might make it better is the elegant dark red and cherry-blackberry undertones of a quality Trader Joe's Organic Pinot Noir, affectionately known in this household as 4-buck chuck. The slight amount of caffeine in this dry-roasted almond butter also serves to counteract the somewhat sleep-inducing properties a glass of red has on this lightweight.

If you already get enough resveratrol in your diet, I'd recommend a good strong stout. I'm partial to our local NEFF Brewing's Imperial stout, which balances the notes of chocolate and espresso with just enough hoppy bitterness. 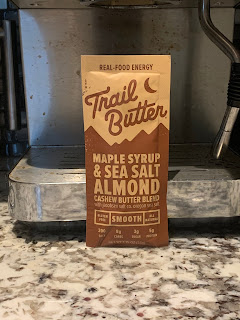 Ok, so I lived in Vermont just long enough to become a maple syrup snob. The maple syrup and sea salt trail butter tastes like real maple syrup. Just a hint so as not to get sweetness-fatigue when you're actually running around outside with it and not doing some harebrained taste testing in your kitchen at 9pm on a Tuesday. Or is it Friday? Monday? Does anyone know at this point? Whatever, there's a nice amount of sea salt to balance it out, and the smoky vanilla-molasses undertones of some Michter's small batch bourbon really brings this culinary experience together.

I struggled to find anything truly better than "more maple syrup" to go with this, which is true of life in general. 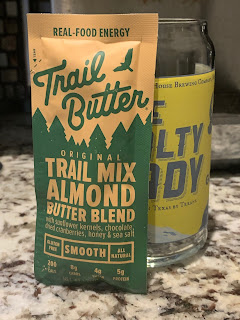 The OG pairs clover honey, cranberry, and a hint of chocolate with an almond-sunflower butter blend. I tried real hard to like a dry white wine with this, but it's really better suited to some sort of blonde ale. I went with NEFF brewing's Apollo Blonde because, well, it was in my house. It's only in my house because it's good though.

My partner hates blonde ales because he's weird, and preferred Prairie Artisan Ale's Rainbow Sherbert sour with the Original Trail Mix. If you're two years old, this is what you should reach for. Side note, please don't give your 2 year old booze. 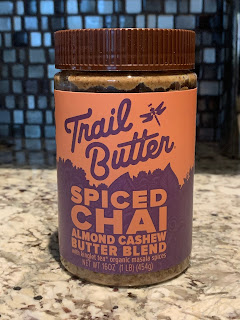 First of all, if you haven't tried the new limited edition Spiced Chai trail butter flavor, it's probably because I ate it all. Sorry. If you do manage to get your hands on some and want to go full-on warm and fuzzy inside, have a nice mulled red wine with it. To achieve this, I take a bottle of cabernet and dump it in the slow cooker with cinnamon sticks, cloves, oranges, and maple syrup.

In reality I actually drink very little alcohol, despite the ridiculous nature of this post. Thus, our runner-up is an homage to my actual favorite post-outdoors beverage: kombucha. Give the Health Ade (also seasonal) Holiday Cheers kombucha a go if you're not so sure about kombucha. It tastes like Christmakah. And the probiotics will help you digest the trail butter (maybe. Actually I made that up. Sounds plausible though.) Brew Dr. also makes a seasonal vanilla oak kombucha that would pair nicely.

Almost forgot - 10% of sales of their Spiced Chai Almond Cashew Butter go to the Conservation Alliance. So you are literally doing the world a favor by eating this.