In a weird stressful uncertain year, it makes sense that I would return to running. Also in a weird twist of fate, after months of neurologic complications from occupationally-acquired Covid-19, running has caused the least amount of headaches and brain fog. Maybe it's the helmet or more constant vibration from gravel/mountain bike terrain, but cycling any distance continues to be...complicated.

There was a recent New York Times article about the public health professionals and frontline healthcare workers struggling to do objectively safe things post-vaccination (e.g. be outside.) The mental block/secondary post-traumatic stress syndrome is real. It took weeks of fretting to sign up for my first event in over a year. One with fewer than 100 people spread out outside over miles of trail, 5 miles from home, in a community with declining infection rates. As a fully vaccinated *and* post-Covid-antibodied individual. At a certain point you need a little exposure therapy, and a start on releasing a year's worth of built-up trauma. I may have also chosen the 6-hour race option over the 3-hour race option primarily because there would be fewer people on the start line.

Turkey Mountain (there are no turkeys) is familiar territory, but I actually rarely run on the upper lot trails, where one can find the Snake Trail (from which this event gets its name.) I have a tendency to get lost up there, to the surprise of no one. My sole landmark is an old rusted washer/dryer. If someone ever hauls that blessed object out of the woods, I will likely never make it back to the parking lot. Anyhow, the kind people who came up with this race format gave us a 3.75 mile loop on the Snake Trail, and a shorter 0.5 mile loop somewhere over on the blue trail to run circles around when you ran out of time to do another 3.75 mile loop. Whoever runs the most miles in the allotted time gets a scary snake trophy. The course is well-marked, flat, and with mild to moderate trail sharks. You have to watch your footing, but it doesn't require 100% of your brainpower. Not a bad way to ease back into the running world...

It was raining lightly at the start. I put every piece of gear I might want into my car, since for an extra 50 yards of running I could self-support whatever the heck I needed from the comfort of the parking lot. The first lap passed without incident in a nice light rain and a not-too-drenched trail. A handful of fast dudes went blasting out at a pace way faster than my technical skills will take me, but I comfortably ran 8-9 minute pace according to Garmin. About three-quarters of the way through my second lap the skies absolutely opened up, which was fine until my eyeballs flooded with water, and anyone with a contact lens prescription greater than -5 knows what I'm talking about. I almost always run with a visor or hat partially because of this. This was the one item I managed to leave at home, so I comically and blindly staggered out of the woods and stole my boyfriend's hat off his head. Having one's day ended by loss of contact lenses in thunderstorm would be embarrassing.

The Snake trail turned into more and more of a mud slog as time went on, with full-on tiny muddy lakes most of the way. TL;DR version of the subsequent 5 hours: tiny hip stabilizing muscles got real tired and the 7th and 8th (final) laps I "ran" were more of a hobble. I probably did not hydrate enough - had this happened by osmosis I would've been just fine 😂 I did throw down two dark chocolate trail butter packets and about 5 V fuel gels. I made a feeble attempt at the short loop with my remaining time, as I was at 30 miles and the female race record was 31 miles...but my body was not having it. Also there were bigger rocks on the short loop.

My body decided it was cold shortly after I stopped moving, and I decided to sport my swanky swim parka. Credit to SOAS Racing for those tights (and they have pockets.) First place in style and mud-fording: 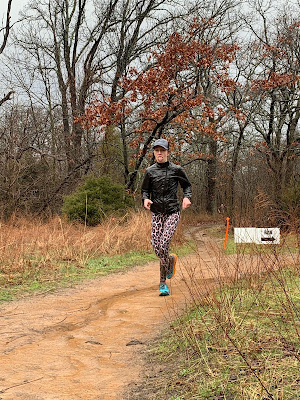 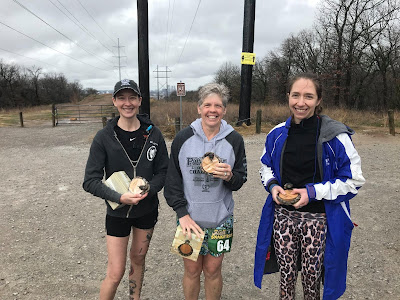 Posted by Adrienne Taren at 6:09 AM